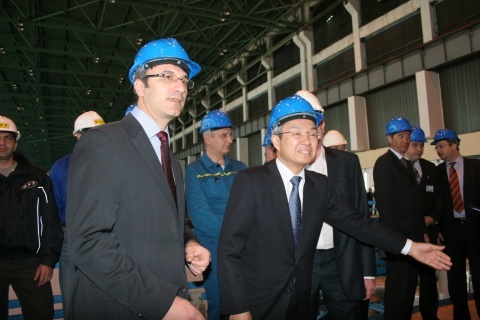 Toshiba is going to perform a feasibility study for the construction of a coal-fired thermal power plant in Bulgaria that will feature carbon capture and storage facilities (CCS), the Japanese company has announced, apparently moving closer to a potential massive energy investment.

Toshiba Corp will inspect if a TPP with a carbon capture and storage facility could be built in the Maritsa East complex in southeast Bulgaria, which features a large-scale lignite coal mining complex and three major thermal power plants, Toshiba announced on Tuesday, as cited by Dow Jones.

If realized, this would be Toshiba's second investment in Bulgaria's energy sector after at the end of January the Japanese corporation announced a project to invest EUR 37.6 M in a 10-MW solar park near Yambol during the visit of a Bulgarian state delegation in Japan.

Toshiba's CCS feasibility study in Bulgaria will be carried out together with Schlumberger Carbon Services, Sofia University and Taisei Corporation; itwill run from July 2011 to the end of March 2012, Toshiba has announced. It has been selected to carry out the feasibility study by the Bulgarian government.

In June 2011, the American AES Corp launched its TPP AES Galabovo, at Maritsa East 1, a 600-MW entity. At the very end of June, Italy's Enel completed the sale of 908-MW Maritsa East 3 to US investment fund Contour Global. The Bulgarian government owns the 1 580-MW Maritsa East 2 TPP. The entire Maritsa East complex with its 3 TPPs produces 30% of Bulgaria's energy.

There are several possibilities for investments in new coal-fired units in Bulgaria's Maritsa East TPP complex. According to Traikov, if the Toshiba investment is in the Maritsa East 2 TPP, it will be providing electricity at the lowest possible TPP price in Bulgaria.

This was followed up in February with an announcement that the Japanese corporation will open a regional representation in Bulgaria that will handle its operations in Central and Eastern Europe, the Middle East, and North Africa. Thus, Bulgaria will become the second European country after the UK with an EMEA operations office of Toshiba, according to the Bulgarian Ministry of Economy, Energy, and Tourism.