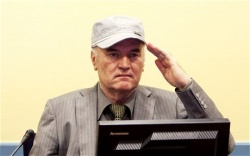 Ratko Mladic during his first appearance at the UN court. Photo by Getty Images

Ratko Mladic, the former Bosnian Serb military leader, has threatened he would not attend the plea hearing on Monday, demanding to be able to choose his own lawyers.

He wants to be represented by Belgrade-based attorney Milos Salic and another Russian lawyer, but officials from the tribunal are yet to scrutinize their their qualifications and eligibility, as they have not had enough time to do that.

Salic himself has said that if Mladic "is forced" to attend the Monday court session "he will certainly not enter his pleas," The Telegraph reports.

Even though Mladic will most probably fail to attend Monday's hearing, preparations for the hearing are ongoing as planned, since the tribunal had not been officially informed of any planned boycott, a spokesperson has declared.

Mladic stands accused of genocide, violations of the laws and customs of war and crimes against humanity during the 1992-1995 war in Bosnia. He was arrested in Serbia on May 26 after 16 years spent hiding from the international justice.