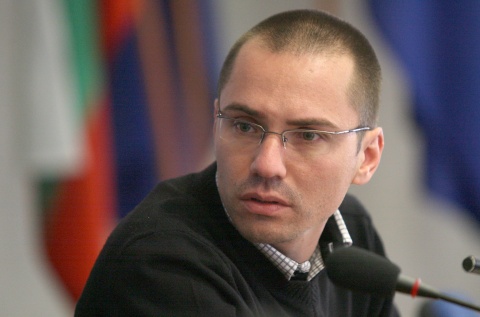 About 30 protesters from the Bulgarian nationalist party VMRO have rallied during a conference of the Jehovah's Witnesses in Sofia, which was guarded by three times as many policemen.

The tight security measures appear to have been taken after after tensions ran high between VMRO and the Jehovah's Witnesses in the recent months, including hand-to-hand clashes in Burgas at one point.

Saturday's protest of the nationalists against Jehovah's Witnesses, who held their conference in the Studentski Grad quarter, where the dormitories of Sofia universities are located, ended without clashes.

According to Angel Dzhambazki, Deputy Chair of VMRO, as cited by news.bg, the participants in the conference are about 200-300 people brought to Sofia by buses, and including primarily "foreign preachers who don't speak Bulgarian and are trying to attract to their sect primarily young and unstable people."

He believes that the Jehovah's Witnesses are blackmailing the Bulgarian government, and said that when the organization was registered in Bulgaria, it signed an agreement with the authorities that it will not try to persuade people not to donate blood or organs.

"However, the Jehovah's Witnesses are continuing to preach these ideas at every religious gathering they make. After you have predicted the end of the world five times, and it didn't happen, there must be something wrong with the clock ticking in your head. Such craziness blossoms in a time of crisis when people are faithless, outraged, and poor," Dzhambazki said, while slamming the representatives of the Bulgarian Orthodox Church for driving around in jeeps and wearing expensive watches and massive gold jewelry.

The VMRO protesters said they are rallying against the Jehovah's Witnesses not because the organization is different from Eastern Orthodox Christianity but because they deem their "religious propaganda" dangerous for society by denouncing all national and religious holidays and the respect for national symbols and family values.

Dzhambazki vowed that VMRO will continue to rally until the Jehovah's Witnesses stop preaching their "mad theses". He stressed that the organization has not been registered in a number of EU countries as well as in Turkey, and that there is a reason for that.