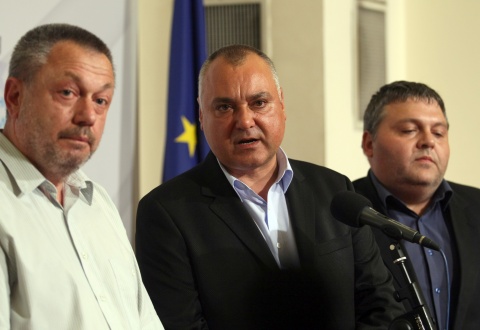 The 3 MPs who left the parliamentary group of nationalists Ataka as a protest against clashes of party activists with Muslims in Sofia. Photo by BGNES

The 3 renegade MPs from Bulgarian nationalist party Ataka declared Wednesday they have received no money from the ruling center-right GERB party for their support.

Kiril Gumnerov, Valentin Nikolov and Ognyan Peychev left the Ataka political group in Parliament late May, in protest against the incident in which Ataka activists, including MPs clashed with praying Muslims in the central Sofia mosque.

This prompted a string of mutual accusations, with Ataka leader Volen Siderov claiming that GERB had "bought" his erstwhile MPs using GERB money and deflecting a part of the state subsidy that belongs to Ataka for its election results in 2009.

The renegade MPs on their part claimed that they and other nationalist MPs have been made dependent by being forced to to sign promissory notes turning them into guarantors of loans taken by offshore companies.

The other political parties in Parliament, such as rightist Blue Coalition, ethnic Turkish Movement for Rights and Freedoms, and the Bulgarian Socialist Party, have univocally but independently argued that the situation raises serious concerns about party funding and MP dependence in Bulgaria.

Front bench MPs such as the Blue Coalition's co-leader Ivan Kostov, MRF's Lyutvi Mestan and socialist leader Sergey Stanishev have called for a check by the National Audit Office and the institution of an ad hod parliamentary committee to ascertain the circumstances around the allegations.

Representatives of the GERB political group in parliament have denied allegations and this far have neither approved nor rejected the requests for a formal check.