Who Is Who: Top Bulgarian Tennis Player Tsvetana Pironkova 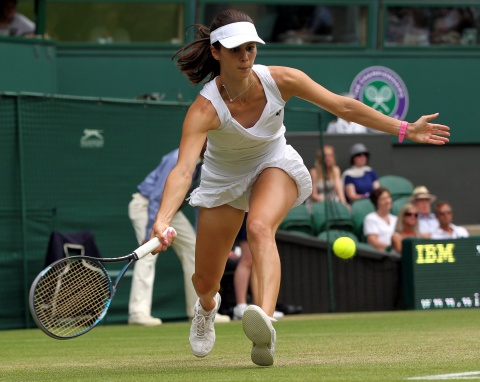 Tsvetlana Pironkova of Bulgaria returns to Venus Williams of the US during their fourth round match for the Wimbledon Championships at the All England Lawn Tennis Club, in London, Britain, 27 June 2011. EPA/BGNES

Tsvetana Pironkova was born September 13, 1987 in the Bulgarian city of Plovdiv. Both her parents are athletes – her father Kiril Pironkov is a republican canoe champion and Tsvetana's tennis coach; her mother Radosveta Pironkova is a swimming champion.

In a twist to this athletic upbringing, her grandfather Encho Pironkov is a painter and instilled in her a passion for art.

Tsvetana started playing tennis at the age of five and soon appeared as one of the young hopes of Bulgarian tennis. Her debut in ITF singles tournaments is in 2002 with a final in Bucharest and win in Volos. The next year brought her new titles and she then moved on to higher-ranking contests.

2005 Pironkova entered the world's top 100 women's tennis players at number 88. In 2006, besides taking part in important contests such as the French Open and Wimbledon, she marked an important win against Venus Williams (2-6, 6-0, 9-7) at the Australian Open.

In 2008 Bulgaria's best female tennis player reached semi-finals in Istanbul, and quarter-finals in Rome, getting up to number 40 in world ranking, which is her best showing to date.

Her most important success to date has been at Wimbledon 2010 where she reached the semi-finals.

At Wimbledon 2011, however, Pironkova got her revenge against Zvonareva kicking her out in the third round.

In the fourth round of Wimbledon 2011, Pironkova defeated for a second year in a row Venus Williams by 6:2, 6:3, proceeding to the quarter final.

Before her participation in Wimbledon 2010, Pironkova was ranked 82; a year later, before Wimbledon 2011, she was 32.