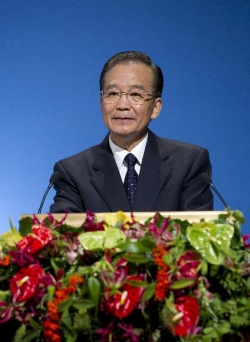 China has offered the region of Central and Eastern Europe a five-point proposal designed to give a boost to the bilateral cooperation and economic and people to people ties.

The five areas proposed for greater cooperation were outlined by Chinese Prime Minister Wen Jiabao at the "China - Central and Eastern European Countries Economic and Trade Forum" in Hungary's capital Budapest on Saturday, where Bulgaria was represented by its Minister of Economy, Energy, and Tourism Traicho Traikov.

The China-CEE economic forum was preceded by a visit to Bulgaria on Friday by China's Minister of Industry and IT Miao Wei.

Speaking at the forum in Budapest Saturday, Chinese PM Wen stated that China cherished its longstanding and deep friendship with the countries in Central and Eastern Europe.

"Over the past several decades, although the international situation and the domestic situations of both sides have undergone big changes, we have always enjoyed mutual respect, mutual trust, mutual understanding and mutual support," Wen said, as cited by Xinhua.

He said cooperation in various fields between the two sides had made tremendous progress, referring to the rapid growth of two-way trade, the burgeoning of mutual investment, the expansion of cooperation areas and the improvement of cooperation mechanisms.

China encouraged its companies to "go global" and saw central and eastern Europe as a strategic priority, the Chinese leader said, adding that his current visit was "both a journey of friendship and a journey of cooperation."

"Currently, trade between us takes up less than 4% in our respective total foreign trade and less than 10% in China-EU trade," he said, declaring that the boosting of bilateral trade should be the first area of deepening ties between China and Eastern Europe.

Noting that "much potential remains to be tapped," the Chinese premier called on both sides to open markets wider to each other, reduce tariff and non-tariff barriers, set up cooperation in customs, quality inspection, logistics, and personal entry and exit. Wen promised to facilitate access to the Chinese market for competitive products from central and east European countries by holding more commodity fairs.

Second, Wen called for both sides to promote two-way investment.

He also said the two sides should enhance investment cooperation in such areas as telecommunications, new energy and agriculture, and encourage joint establishment of industrial parks and high-tech development zones.

With China supporting competitive Chinese enterprises to invest in Central and East Europe countries, it also hoped these countries could relax restrictions to market access and technical standards where appropriate, and provide policy support for Chinese investment, Wen said.

Third, the Chinese PM urged both sides to enhance infrastructure construction cooperation, an area where China is known for its massive and speedy projects.

"We support Chinese enterprises in undertaking infrastructure projects in Central and Eastern European countries through PPP (Public-Private Partnership), BOT (build-operate-transfer) and other customary formats in Europe," he said.

"The Zemun Bridge in Serbia, which will soon be built, will become the first 'business card' of Chinese enterprises to access markets in central and east Europe countries. China is willing to accelerate the construction of the Eurasia Railway and will support enterprises in establishing a smooth logistic network to facilitate the flow of goods and personnel between the two sides," Wen said.

He also said the two sides should deepen fiscal and financial cooperation.

"We support financial enterprises of both sides in setting up branches in each other's countries and increasing the scale of cross-border trade settlement in RMB (the Chinese yuan)," Wen said.

China is exploring the possibility of setting up a cooperation fund between the two sides, which would provide strong support for their economic cooperation and trade, the Chinese PM revealed, adding, "We support the economic and financial adjustment measures adopted by the central and east European countries, and have confidence in the future of their financial markets."

Pointing out that both sides should increase exchanges in such areas as education, culture, health, sports, tourism and science, Wen said they also needed to enhance in particular the mutual understanding and friendship between the young people of the two sides.

"China supports exchanges between institutions of higher learning of the two sides and hopes to see more students from central and east European countries in China," Wen added.

During his speech, Wen admitted the scale of trade and investment between the two sides remained "relatively modest." "But given the high economic complementarities, I see great potential and broad prospects for our business ties," he said.

Wen declared he was confident that, with a pioneering spirit, business people of the two sides would take the China-Eastern Europe forum as a new starting point to work concertedly to bring in a new phase in bilateral economic cooperation and trade.