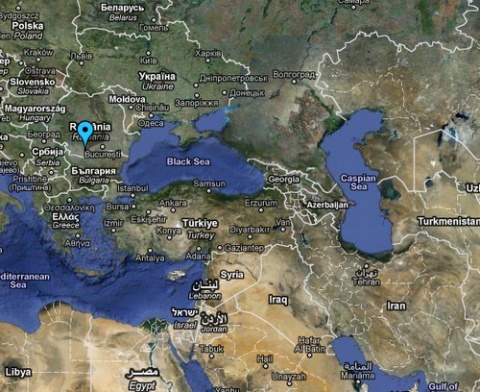 The Deveselu air base in Romania will host the interceptors of the future US/NATO missile shield in Europe, while Bulgaria remains the second most likely location of the radar after Turkey. Map from google maps

Bulgaria is likely to host elements of the US/NATO missile defense system in Europe instead of Turkey if Turkey refuses to host them, according to Bulgarian Deputy Defense Minister Avgustina Tsvetkova.

Turkey's position about hosting elements of the US and NATO missile shield, most likely its radar system, should be clear by the fall of 2011, Tsvetkova told journalists in Pamporovo Friday. Should Turkey decide against hosting part of the missile defense, then Bulgaria could start talks with NATO to host the same elements, she explained.

Tsvetkova did say that for the time being there are no plans to station elements of the US and NATO missile defense system in Europe on Bulgarian territory. She reiterated the official position of the government, which insists that Bulgaria's entire territory must be covered by the future missile shield.

The past few months since the NATO summit in Lisbon in November 2010 took a decision to adopt the project for the US missile system in Europe as an Alliance-wide shield have seen occasional reports that Bulgaria might host elements the radar of the system.

The original missile defense in Europe plan of George W. Bush administration provided for stationing interceptors in Poland and the radar station in the Czech Republic. The modification of the plan by the Obama Administration switched it to sea-borne missiles and, later on, locations in southeastern Europe. Initially, there were reports and expectations that Romania and Bulgaria will replace Poland and the Czech Republic, respectively.

During its summit in November 2010 in Lisbon, NATO agreed to adopt the previously purely US missile shield project as its own. The summit did cast some serious doubts over Turkey's participation in the missile defense system because it insisted that its Muslim neighbor Iran should not be mentioned as a source of threat in the respective documents, and eventually prevailed.

In May 2011, the US State Department and Romanian President Traian Basescu announced that the interceptor missiles of the future NATO/US missile shield in Europe will be stationed at the Deveselu Air Base near Caracal, Romania.

The System employs the SM-3 interceptor (also referred to as the "Aegis Ashore System") while the deployment to Romania is anticipated to occur in the 2015 timeframe as part of the second phase of the European Phased Adaptive Approach (EPAA) – the US national contribution to a NATO missile defense architecture.

The US Ballistic Missile Defense site is approximately 430 acres (175 hectares) and is located within the existing Romanian Air Base at Deveselu.

Deveselu is about 50 km away from the Romanian-Bulgarian border. The closest Bulgarian location is the village of Zagrazhden between the towns of Oryahovo and Nikopol.