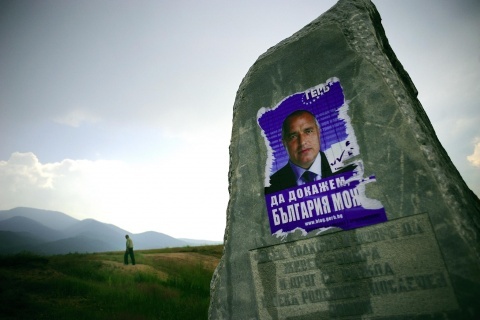 An election poster of Bulgarian GERB party leader Boyko Borisov on a monument where it reads 'A man could live well but dies at the end and after him another one is born...' in the town of Dobrinishte some 180km from Sofia, Bulgaria. Photo by EPA/BGNES

The center-right party of Prime Minister Boyko Borisov, which scored a landslide victory in the elections in the summer of 2009, will garner 28.2% of the votes, according to the poll.

It was conudcted by the Centre for Analyses and Marketing in the period from June 13-19, just as the spectre of early elections continued to pop in and out of the war of words on the political battlefield.

The Socialists are expected to come in second with barely 17.1%, followed by the ethnic Turkish Movement for Rights and Freedoms (DPS) at 5.9%.

The far-right Ataka, until recently an ally of the current government, and the right-wing Blue Coalition, which has repeatedly criticized it for lack of expertise and dodging painful reforms, will not manage to pass the 4% threshold and will go by the board.

If elections were held today, the ruling party will have between 116 and 121 members of parliament, just on the verge of enjoying a comfortable majority. That's the reason why experts say GERB is the only party, which may benefit from snap elections.

The center-right government of Boyko Borisov's party GERB now has 117 of a total of 240 seats in the unicameral chamber and has governed so far with the support of Ataka, a fervently nationalist group, which however has no ministers in the government.

Five months ahead of the presidential elections on October 23 and with the pre-election campaign already in full swing, a total of 49.2% of the respondents in the survey said they are determined to cast a ballot. Another 26.2% say they are set to vote but have not yet picked their favorite runner.

The idea of early parliamentary elections, to be held together with the presidential and local vote, does not enjoy public support - 41,9% of the respondents said they are against it and want the current government to stay in office until the end of its term.