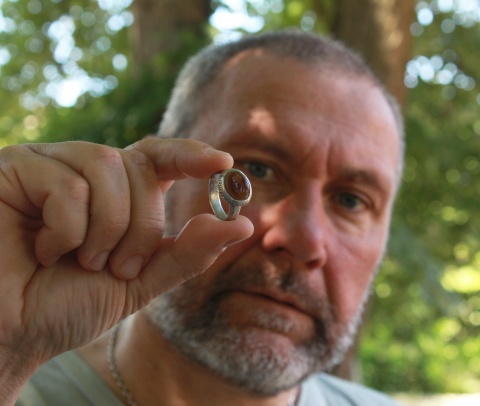 Prof. Nikolay Ovcharov shows his latest discovery - a medieval silver ring with the image of an emperor or a deity. Photo by BGNES

The silver ring is dated back to 15th-16th century during excavations of the St. Peter and St. Paul monastery in Veliko Tarnovo, the capital of the Second Bulgarian Empire.

The ring bears the image of a man with a wreath on his head, and a brown and white stone.

Ovcharov says the man on the silver ring could be an emperor or a deity even though there is little certainty about its meaning.

Ovcharov and Vachev are excavating the monastery complex in Veliko Tarnovo which in the late Middle Ages served the churches of St. Peter and St. Paul and St. Ivan Rilski.