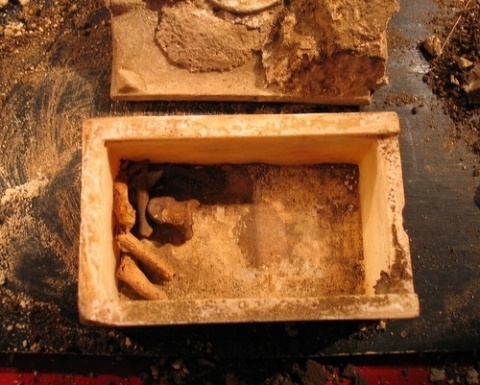 The remains, purported to be John the Baptist, including a skull fragment and a tooth, were uncovered in July last year during the excavation of a fourth-century monastery on St. Ivan Island, off Bulgaria's Black Sea coast. Photo courtesy by K. Popkonstan

The relics, unearthed last summer off Sozopol on Bulgaria's southern coast and purported to be St. John the Baptist, will be moved to SS Cyril and Methodius church in Sozopol.

The relics are expected to arrive in the renovated church on June 25 and will be welcomed solemnly by the clergy, citizens and politicians, including Prime Minister Boyko Borisov.

The remains believed to be John the Baptist, including a skull fragment and a tooth, were uncovered at the end of July last year during the excavation of a fourth-century monastery on St. Ivan Island, off Bulgaria's Black Sea coast. They were in a sealed reliquary buried next to a tiny urn inscribed with St. John's name and his birth date.