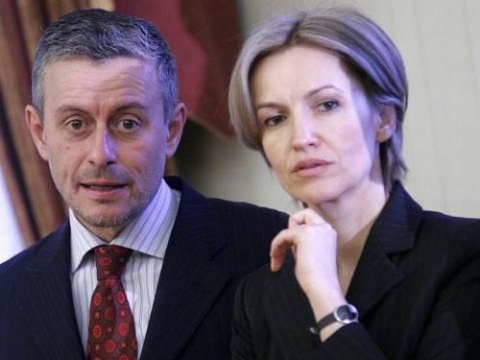 Solomon (left) and Gergana Passy, the Bulgarian family of two former government ministers, who came up with the idea for a common mobile phone charger in 2008, is now promoting access to Internet as 5th EU freedom. File photo

Access to high-speed Internet should be the 5th EU freedom and a fundamental right on EU territory, according to a letter submitted to the European Commission by Dr. Solomon Passy, President of the Atlantic Club in Bulgaria, and Gergana Passy, President of Pan-Europa Bulgaria.

The new intiative of the Passy family, who in 2008 came up with the idea for common mobile phone charges, a contribution recognized by the EC, promotes Internet access as a Fifth EU freedom, in addition to the four freedoms of movement – of people, capitals, goods, and services.

"We, being average EU consumers, highly appreciate the policies of the EC regarding Internet and the access to it, as well as the priority which you attach to this topic. We particularly value your vision of the Digital Agenda for Europe 2010-2020, its current achievements and the envisaged future results," state Dr. Solomon Passy, a former Foreign Minister of Bulgaria, and Gergana Passy, a former Bulgarian Minister for EU Affairs.

"We would like to draw your attention to one particular but yet critical issue on the intersection of your respective three portfolios. This is the free of charge pan-European access to high-speed and reliable Internet services in all public areas (hotels, airports, restaurants, cafes, petrol stations, stadiums, schools, universities, theatres, shopping malls, parks, vehicle stops and stations, public restrooms etc), in all public transportation vehicles (airplanes, subway, trains, shuttles, boats etc.) as well as in all Governmental and Municipal offices and real estate properties on EU territory.  What we have in mind is both, cable and wireless high-speed Internet.

The Passy family point out that paying a fee of EUR 10-15 for Internet access in a five-star European hotel is equivalent to being charged for the hot water in the bathroom, for the electricity in this same hotel, "оr even for the air you breathe."

They mention that Bulgarians are actually more privileged than other Europeans in that respect: Bulgaria is 5th in the world in quality of broadband Internet, while Sofia is 11th city in the world in the quality of Internet connection (according to a research of Cisco Systems, conducted by Oxford University).

"However all Europeans deserve much more than that. Therefore, we encourage you to take necessary steps leading to lifting the restrictions to access of EU citizens and visitors to Internet. Referring to  your remarkable leadership on reducing the roaming charges (which eventually leads to broader Internet access as well) we believe that such steps can be taken as soon as this coming summer, to facilitate the EU citizens' travel during the vacation season.  (We do believe that your efforts in fighting with roaming charges deserve full support until we eventually succeed to entirely eliminate all roaming taxes both in EU and worldwide.)," state the authors of the initiative for making Internet access a 5th freedom in the EU in addition to the four freedoms of movement – of people, capitals, goods, and services.

They further quote the recent UN Report On the Promotion and Protection of the Right to Freedom of Opinion and Expression, May 16th, 2011, which recognizes the right of all individuals to have Internet access as one of the basic human rights such as the right to education and freedom; the Report recommends Internet to be made widely available, accessible and affordable to all people.

"We do believe that access to Internet should be regarded as the newest, Fifth Freedom of the EU, alongside the free movement of people, goods, capitals and services and the Facebook revolutions in Africa and the Middle East have just proven this.  The EC has always been among the world's top leading institutions in digital agenda, human rights and consumer protection and we believe that our suggestion is in full compliance and logical continuation of the existing policies of the EC,"

In support of their new initative, the Passy family reminds that a letter of theirs in May 2008, addressed to then EC's Vice-President Guenter Verheugen initiated the procedure for standardization of all chargers for mobile phones, ushering into the EU policy for common chargers of mobile phones that is in effect as of early 2011, and has been recognized by the EC as a unique Bulgarian contribution thanks to Solomon and Gergana Passy.

"We do hope that this time the process will be much faster especially having in mind the EC's momentum. We know that some bureaucratic obstacles and narrow corporate interests have to be overcome during this process but we are deeply convinced that the broad public recognition of the results will be a great reward for your efforts," concludes the Passy family its appeal to the EU Commissioners over Internet access in the EU.

Dr. Solomon Passy, the founder and President of the Atlantic Club of Bulgaria, was Bulgaria's Foreign Minister of Foreign Affairs (2001-2005), UN Security Council Chairman (2002, 2003), OSCE Chairman-in-Office (2004), and Chairman of Bulgaria's Parliamentary Committee on Foreign Policy and Defense in 2005-2009 and 2001. His wife Gergana Passy is Bulgaria's former Minister for EU Affairs, Deputy Foreign Minister and MP (2001-2009).