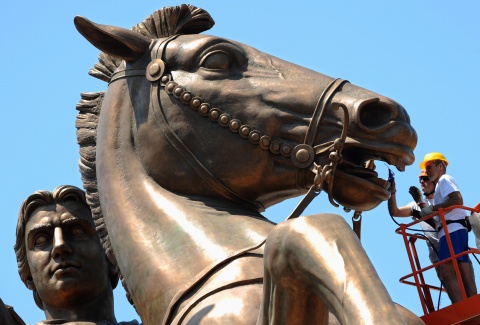 Italian workers finalize the massive statue of Alexander the Great on his horse Bucephalus before it will be mounted on a pedestal on Alexander`s birthday at the Macedonia Square, the central square of the capital Skopje. Photo by EPA/BGNES

The 13-meter high statue of a warrior on horseback resembling Alexander the Great in downtown Skopje, which was finished over the weekend, has enraged Greece, which also claims inheritance of the historical figure.

Macedonia is already at loggerheads with Athens over its name. Greece opposes the post-1991 constitutional name of its northern neighbor, citing historical and territorial concerns resulting from the ambiguity between it and the adjacent Greek region of Macedonia.

On Monday, EU Enlargement Commissioner Stefan Fule said that if Macedonia continues to take actions perceived by Greece as "provocations" and fails to make faster progress in its reforms, the country could lose its EU candidate status.

The newly erected Alexander the Great statue is a part of recently reelected Prime Minister Nikola Gruevski's ambition of "Skopje 2014", his multi million plan for a radical reinvention of the city center, which focuses on the nation's "ancient" history.