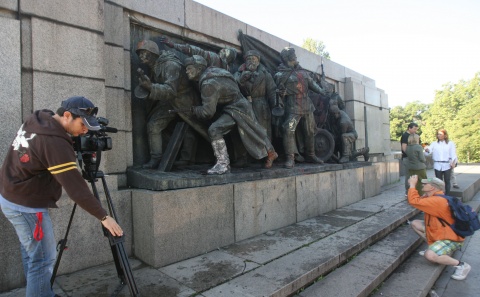 The overnight cleaning of Sofia's Soviet Army monument, which was painted Saturday to ironically represent a set of US pop culture characters, has triggered a wave of angry comments on the Internet.

A Facebook group with nearly 2000 members supporting the makeover has responded to the news, protesting the fact that the monument was cleaned earlier than announced and without anyone asking the general public about it.

Although the Sofia municipality had said the cleaning operation would start at 08:30 Tuesday, the paint was almost entirely gone by 06:00 a.m. The emergency cleanup was carried out at night to avoid provocations and protest actions on the part of supporters of the unknown street artist.

"Cowards!" and "What are they hiding?" are some of the statements made by Bulgarian Facebook users over the overnight cleaning operation. Some have pointed out that fascist symbols and other hateful signs have remained untouched for a long time on the capital's walls.

Others, however, have approved of Tuesday's action, pointing out the monument is a work of art representing the soldiers' heroism and should not be mocked in that way.

Meanwhile, the municipal authorities of the Bulgarian capital Sofia have stated they have not issued a permit for the cleaning. The monument is owned by the state, the Sofia municipality has said in a special statement.

The cost of the operation, BGN 840, was covered by non-governmental organizations.

According to reports of the Bulgarian National Television (BNT), the money has been provided by Forum "Bulgaria-Russia", chaired by Svetlana Sharenkova.

On Saturday, an unknown street artist painted the bronze figures of Soviet soldiers in downtown Sofia, turning them into various US superhero and other pop culture characters – including The Joker, Wolverine, Santa, Superman, Ronald McDonald, Captain America, Robin, and Wonder Woman.