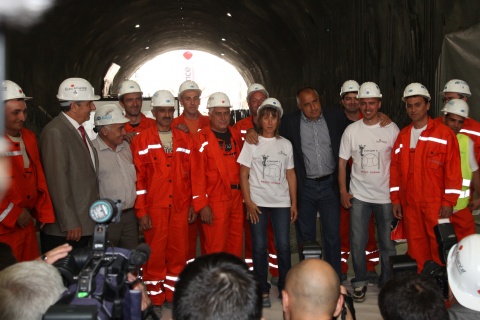 The builders of the tunnel of Sofia Metro's second line with Bulgarian PM Borisov. Photo by M3 Communications Group, Inc

The subway tunnel with the largest cross section in Europe has been formally completed in the Bulgarian capital as part of the construction of the second line of the Sofia Metro.

The tunnel at Metro Station 8 of the Line II of the Sofia Metro has a cross section of 258 square meters, and is 108 meters long, 18 high, and 22 meters wide.

Metro Station 8 is the spot where the second line of the Sofia Metro will cross and inter-connect with the existing first line at its Serdica Station near the Sheraton Hotel and the Tzum retail center.

The company in charge of the construction of the respective section and the tunnel of the second line of the Sofia Metro – Euro Alliance Engineering – presented Bulgarian PM Borisov with an icon of Bulgarian saint, St. Ivan Rilski.

Metro Station 8 of Line II of the Sofia Metro has been described as the probably the most complex underground facility in Sofia. It will be the crossing point of Line I – going from the Obelya and Lyulin Quarters via the downtown to the Mladost Quarter, to be extended to the Sofia International Airport and Business Park Sofia – and of Line II - going from the Obelya and Nadezhda Quarters via the downtown and the Central Railway and Bus Stations to the Lozenets Quarter.

The archaeological lawyer uncovered during the metro construction was not destroyed but the tunnel went under it, and the finds will be displayed for the commuters.

With the completion of the tunnel, Metro Station 8 of Line II is to be further equipped and completed, and the special tunnel digging machine will continues its work near the National Palace of Culture.

Experts from the Sofia Municipality and the ministries of transport and culture have lent support to the builders of the tunnel.