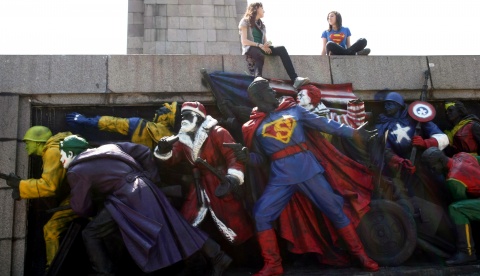 On Saturday, an unknown street artist painted the bronze figures of Soviet soldiers in downtown Sofia, turning them into various US superhero and other pop culture characters. Photo by BGNES

The makeover of the Sofia Soviet Army monument, which was painted by unknown street artist to represent a set of US pop culture characters, was condemned Monday by Bulgarian Culture Minister Vezhdi Rashidov.

"The painting of the Soviet Army monument is vandalism. Whether it has art merits is another topic," Rashidov said, as cited by the Bulgarian National Radio. He went further to describe the act as a "crime".

On Saturday, an unknown street artist painted the bronze figures of Soviet soldiers in downtown Sofia, turning them into various US superhero and other pop culture characters – including Superman, Santa Claus, Batman's sidekick Robin and his adversary the Joker, as well as McDonalds's symbol Ronald McDonald, among others.

"Never mind whether we like it or not, Bulgaria lived 50 years under the rule of Socialism and this is a part of our history. If any generation thinks this can be simply erased, it would be unnecessary. Germany did not remove the Russian tank from Berlin, Austria did not remove...We are the only ones led by some kind of destructive force," Rashidov stated.

The Soviet Army makeover attracted flocks of foreign tourists rushing to take photos with it. The unknown artist quickly received acclaim across the global media, with Daily Mail and The Herald sun naming him or her the "Bulgarian Banksy".