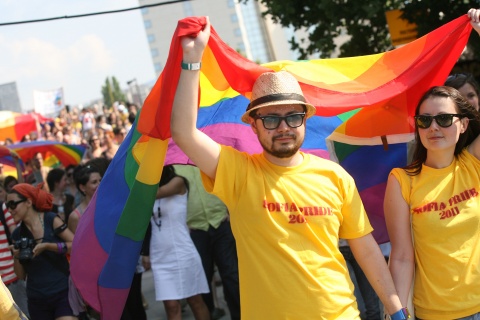 The 4th Sofia Pride gay parade has gone without incidents or provocations. Photo by BGNES

The 4th annual edition of the Sofia Pride LGBT parade in the Bulgarian capital was not marred by any incidents, assaults, or provocations.

After far-right extremists marred the parades in support of equal rights regardless of sexual orientation in Sofia 2008 and 2010 in spite of the massive police presence, the 4th edition of Sofia Pride was also heavily guarded by hundreds of police officers and private security guards.

The procession started at the National Palace of Culture and reached the Soviet Army monument without any incidents whatsoever. The nationalist and far-right formations who wanted to stage a counter-rally have given up on it after the Sofia Municipality banned them from protesting at the same time and area as the gay parade.

The only protesters against the Sofia pride LGBT parade have been a NGO called "Forum for Defending Children and Family" whose protest was seen by Bulgarian media as "cultured" as all they did was hand out brochures entitled "The Myths about Homosexuality."

"The right of peaceful assembly is a fundamental human right," Amnesty International representatives told the participants in the Sofia gay parade in a congratulatory address.

Some of the young participants in the gay parade told reporters their parents were still unaware of their actual sexual orientation.

The organizers of Sofia Pride have stressed that the parade is against homophobic and hate crimes, that it does not seek to demonstrate a certain sexuality but to promote equal rights and the right to express any sexuality.

The one more prominent Bulgarian politician who was seen taking part in the parade was Georgi Kadiev, the Sofia Mayor candidate of the Bulgarian Socialist Party in 2009 and running against in the fall of 2011, a former deputy finance minister also known as the "red yuppie".

Kadiev, a Sofia city councilor, said he attended the gay parade in order to promote some normalcy amidst all the agression in Bulgaria. He made it clear he is opposed to gay marriage and adoptions by gay couples but declared his readiness to defend the right of expression of any sexual orientation.

Participants from Greece Pride, who traditionally attend the Bulgarian gay parade, were once again in Sofia, this time with a banner saying "Kiss Me Everywhere." Other participants from abroad have also attended Sofia Pride.