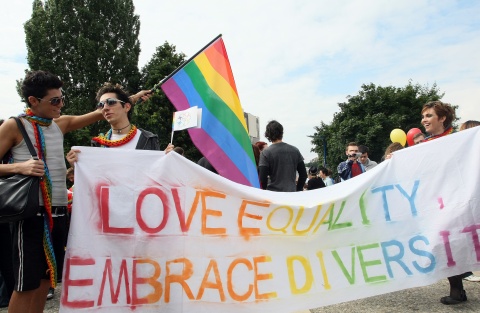 The 4th annual Sofia Pride LGBT parade against the discrimination of people with various sexual orientation has started in the Bulgarian capital late Saturday afternoon amidst increased security measures designed to stave off provocations.

Several hundred participants rallied between 4 pm and 4:30 at the starting point of the Sofia Prida gay parade near the National Palace of Culture in Sofia, guarded by hundreds of police officers and private security guards.

From there, the parade is supposed to reach the Soviet Army monument at about 5:30-6 pm on Saturday.

The Sofia Municipality has issued a ban for a counter-rally requested by nationalist and far-right formations.

The gay parade organizers have stated they have taken all necessary precautions. However, past editions of Sofia Pride – especially the first ever parade in 2008 and the third annual parade in 2010 – were marred by incidents and provocations caused by far-right extremists.

Back in 2008, skin heads assaulted parade participants with Molotov cocktails leading the police to round up and arrest more than 60 extremists.

The 2009 gay parade in Sofia has been the most peaceful so far, while the one in 2010 saw several more minor provocations.