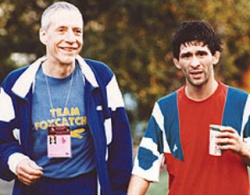 Bulgarian wrestler Valentin Jordanov Dimitrov and his wife have been accused of exerting undue influence over John E. du Pont, the famous late millionaire murderer, who bequeathed to them a huge part of his estate, local media reported.

John du Pont was sentenced to 13 to 30 years in 1997 for the 1996 murder of Olympic gold medal winner David Schultz. The murder triggered a 48-hour standoff at the palatial 800-acre Newtown property now in question, which ended peacefully with his arrest. He died in prison late last year.

The petition, filed by John du Pont's niece and nephew, Beverly A. du Pont Gaugger and William H. du Pont, says the "physical and mental condition of (John du Pont) were greatly impaired by illness and infirmity, and ... he was not a person of sound mind" at the time the will was executed, Delaware County Daily Times reported.

According to the petition, Dimitrov and his relatives established a residence in Sewickley, Pa., on a property owned by Foxcatcher Inc., a corporation bearing the name of a wrestling club that operated at John du Pont's estate prior to Schultz's murder.

The petitioners claim that once established at Sewickley, Dimitrov and his relatives visited the ailing murderer frequently and poisoned him against his blood relatives. The will refers to each of the Dimitrov family members as "my friend," even those that still reside in Bulgaria.

According to the report du Pont bequeathed a whopping 80% of his estate to the Bulgarian couple and their family members.

At trial, it was established John du Pont was "guilty but mentally ill," a verdict upheld on appeal. He was diagnosed with paranoid schizophrenia, a mental illness the petitioners believe he never recovered from while serving his sentence at Cresson State Prison near Altoona. John du Pont died Dec. 9, 2010, after being found unresponsive in his cell.

His relatives now claim the beneficiaries of his will — none of them related by blood or marriage — gained influence over him by "overpowering his mind," and that he would not have named them beneficiaries at all if not for that influence.