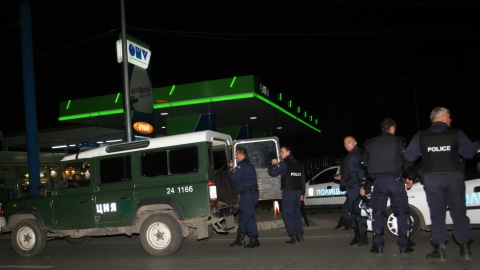 Roma revolted overnight after a police operation in the Zaharna Fabrika district. Photo by BGNES

Roma from Bulgaria's capital Sofia have blocked a major thoroughfare in the city overnight, following a police operation.

The news was reported by the TV channel bTV, informing the roadblock took place on Sofia's "Slivnitsa" boulevard Thursday night into Friday.

Police detained 6 people in the "Zaharna Fabrika" (Sugar Factory) Roma quarter in an operation aimed at robberies and theft, triggering a mass riot among the residents.

Masked policemen entered the quarter minutes before midnight and took 6 people to the nearby 3rd police precinct. Other Roma revolted saying the police arrested innocent people and beat up others for no reason. They insisted the detainees make a living by rummaging into dumpsters and do not deal with theft.

The arrival of Roma leader, Tsvetelin Kanchev, had prevented clashes with police. The situations remained tense until the wee hours, but at the end the Roma have promised to no longer block the road and resist police.

"I appealed to my people with a very simple motive – I explained to them their situation and poverty are the same as the ones of the employees of the Interior," Kanchev is quoted saying.