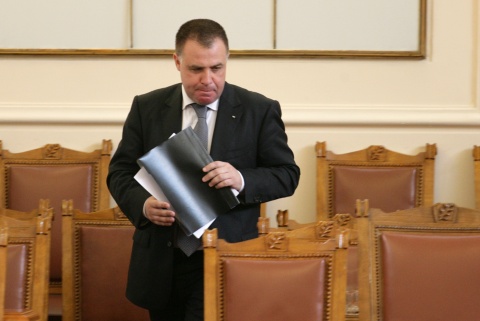 Agriculture Minister Misorlav Naydenov has assured Bulgarian vegetable growers that they can rely on 100% compensation for the losses incurred during the E.coli crisis. Photo by BGNES

Bulgarian cucumber growers will be fully compensated for the unsold or destroyed produce in the period May 26-June 30 over the E.coli outbreak in Europe, announced Agriculture Minister Miroslav Naydenov at a press conference Thursday.

Speaking after a meeting with Bulgarian vegetable growers, he also made it clear that producers of tomatoes, lettuce, courgettes and peppers would also be reimbursed for their losses.

"Losses incurred by Bulgarian farmers by June 07 amounted to BGN 10 M, but the sum keeps growing and now stands at about BGN 12 M" , Naydenov specified.

On June 14, the European Commission is expected to vote on an aid package of EUR 210 M, which is expected to cover 50% of the usual seasonal price of cucumbers in the EU.

According to Naydenov, the measure will allow cucumber growers to receive 100% compensation, given that their compensation requests have been calculated at a price of BGN 0.45 , while the negotiated price under EC's aid offer is around BGN 0.90.

The minister pointed out that, in order to access the financial aid, Bulgarian vegetable producers must sign a contract with the Paying Agency and prove the losses suffered.

"These EUR 210 M are 100% EU money and are supervised by OLAF, the EU Audit Office and other institutions. We fear, however, that somebody may decide to jump on the bandwagon and inflate production figures to Guinness record levels. Joint commissions will be set up within the EU to determine the losses", Naydenov said.

He further noted that, if the EC proposal for an aid package of EUR 210 M is approved, Bulgaria may launch payments instantly.

The Agriculture Minister dismissed allegations that the payments would be suspended if the E.coli crisis dragged on or the sum of EUR 210 M proved insufficient to cover the losses.

In conclusion, Naydenov reiterated that Bulgarian vegetables were safe, assuring that he and his family kept consuming them.

In a separate comment, Bulgarian Greenhouse Association President Plamen Sapundzhiev said that vegetable producers must feel glad because they had counted on 30% compensation.