Bulgaria's PM: GERB Has No Need to Have President in Office 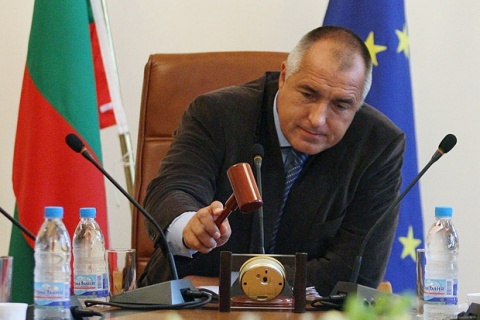 Bulgaria's Prime Minister, Boyko Borisov, confirmed he would not run for President at the upcoming fall elections and will serve his full term as PM. Photo by BGNES

Borisov spoke Thursday, in an interview for the TV channel Nova Televizia, reiterating his statement from the day before he would not run for President at the upcoming fall elections and will serve his term as PM.

"GERB does not need to have the presidential post; it would be too much for us; we have the PM one, the ones of the Speaker of the Parliament and of Regional Governors. This post will not bring us anything that would help to carry out our other work. Our efforts will be focused on winning the local elections since mayors then will work with ministers on common tasks," Borisov said, adding the nomination of the opposition Bulgarian Socialist Party, BSP, will be the strongest GERB rival in the presidential vote.

When asked to comment on the fall-out with the far-right, nationalist Ataka party, the PM stated he was counting on the common sense of its leader, Volen Siderov, who, after overcoming emotions would realize that GERB had no other way of acting and that he does not want to bring back the Three-Way coalition in office.

Borisov pointed out it was impossible to support the Ataka leader's nomination on the grounds he could not explain to people and foreign partners tolerating the actions of the nationalists in front of a downtown Sofia mosque.

The incident took place in front of the Banya Bashi mosque in downtown Sofia on May 20. In it activists of the party assaulted praying Muslims during a rally protesting the mosque's use of loudspeakers.

"I will pay this price as well; I paid with myself and with my party. We will keep the State stable until people trust us," the PM pointed out.

In the interview, Borisov also forecast that in the next month the international rating agencies would increase Bulgaria's credit ratings, adding this would be very rewarding to him because it will show his own and GERB's approval ratings fell for the sake of the country.

The PM confirmed the minimum wage will go up and the needed BGN 20 M are secured through improved revenues. Regarding retirement pensions, he said it will become clear in just days with how much exactly they will be increased.

"I want to give all Bulgarians two and three times more money, but this is what the State has; everything else would be an empty promise," Borisov declared.

Regarding rumors about the dismissal of the Director of the National Revenue Agency, NRA, Krasimir Stefanov, the country's leader informed the latter has three months to improve and act on the remarks he had voiced to him.

Borisov also reiterated his earlier words that magistrates' resignations and the latest scandal shaking the Supreme Judicial Council, VSS, were simply acts of impudence, adding he did not now in person Vladimira Yaneva, who was recently elected as Chair of the Sofia City Court, but her closeness to the family of Interior Minister, Tsvetan Tsvetanov, should not be a reason to not promote her.

"A friend of the Interior Minister is something bad; an advisor of President, Georgi Parvanov is good – what impudence. I would not comment on the professional qualities of people sent by Parvanov, but would ask the Chair of the Supreme Court of Cassations, Lazar Gruev, who is one of the strongest critics of Yaneva's appointment, and a former advisor of the President to refresh his memory and remember how he was selected for the post and if he had any competitors," the PM concluded.