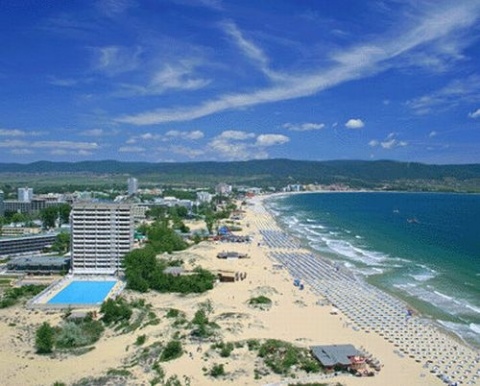 A number of Bulgarian hotel and restaurant owners and suppliers staged a protest Monday in the largest summer resort Sunny Beach.

800 people blocked the main road, leading to the resort, over their discontent with the new rules for access to Sunny Beach, and the infrastructure fees they must pay to the shareholder company with the same name.

The blockade was organized by the Union of Private Owners in Sunny Beach.

Currently hotel and restaurant owners pay the same fee for the infrastructure's maintenance to the Nessebar municipality and the shareholder company. For the first time this year, the management of the resort mandated suppliers of food and beverages to pay a fee to have access to hotels and food and drink establishments. Private owners, cited by the Bulgarian National Radio, BNR, say the fee is illegal.

The road blockade began at 11 am and lasted 20 minutes, during which the demonstrators let one ambulance go through. They were holding signs reading "The Capital Is Not Hostage of Bureaucrats," Emergency Liquidation of Sunny Beach," and "No to Double Taxation," among others.

Some hotel owners complain they fulfilled orders to remove and demolish illegal facilities while the shareholder company is erecting new ones, in violation of the law and without the approval of the Nessebar Town Hall.

Taxi cab drivers are outraged over the BGN 800 asked by the company in order to let them operate in the resort and imposing uniforms that are "ugly and don't fit."