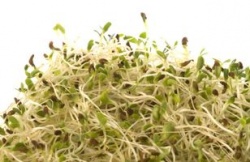 After banning cucumbers, tomatoes and lettuces from the nation's diet, Germany moved Monday to abolish the consumption of bean sprouts, the new top suspect for the deadly E. Coli outbreak.

Investigators have traced the rare strain to a farm in the Uelzen district near the town of Bienenbuettel, 40 miles south of Hamburg, said Lower Saxony state agriculture minister, Gert Lindemann, according to The Guardian.

As the bean sprouts, which most possibly caused the deadly outbreak, were grown in Germany, pressure is expected to mount on local officials.

The Spanish Prime Minister, Jose Luis Rodr?guez Zapatero, on the other hand, has already said he will demand compensation for economic losses after many Spanish farms were forced to stop selling their products.Spanish cucumbers were initially blamed for being the source.

The deadly E. Coli  outbreak has killed 22 people and sickened at least 1,600 in 12 European countries