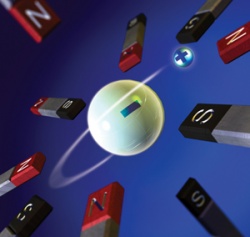 Scientists working at the European Organisation for Nuclear Research, or CERN, have managed to hold antimatter for the record seventeen minutes.

The new record time is 5,000 times longer than the 172 milliseconds they had previously achieved. Antihydrogen, like all antimatter has tends to disappear before scientists have time to examine it.

The exciting breakthrough will give scientists at the European Organization for Nuclear Research time to study the atoms properly, in the hope of understanding what happened during the first moments of the universe.

Scientists believe matter and antimatter should have been created in equal amounts in the Big Bang, destroying each other so that nothing should have been left to form the universe. The fact that we exist and that so much matter remained after this cataclysmic battle is a puzzle still to be solved.