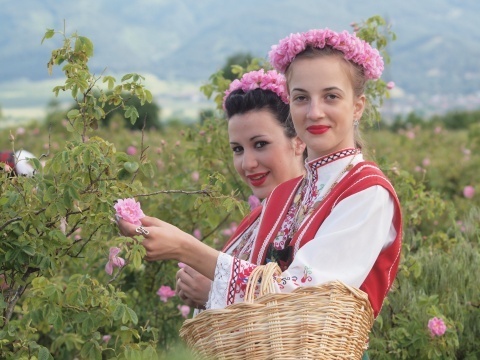 Bulgaria's town of Kazanlak held Sunday the traditional carnival and parade to mark the culmination of the annual rose harvest celebrations.

The parade was led by Mayor, Stefan Damyanov, and by the 2011 holder of the "Rose Quinn" title.

The festivities began early in the morning with the rose picking ritual with people coming from all over the country and from abroad. Official guests included Ambassadors of European countries, South Korea, Venezuela, Kazakhstan, and Georgia, among others.

A charter for friendship with the French city of Grace, center of the French perfume industry, was signed at an official ceremony at the Town Hall. During the week, the French Ambassador to Bulgaria opened the new building of Alliance Francaise.

Other events, related to the harvest celebrations, included the first ever festival of the Rose wine, and an exhibit of new car models.

Kazanlak is located in the so-called Rose Valley, making Bulgaria one of the biggest producers of rose oil in the world. The reason for this is hidden in the high qualities of the Bulgarian Kazanluk rose ("Kazanlashka roza"), a special type, that was cultivated in the region after many years of development. The Bulgarian roses come from the so called Damascena rose.

A large percentage of the harvested roses are used for the production of rose oil - "the liquid gold" of Bulgaria. Rose oil is used mainly for the making of perfumes, chocolates, liqueur and jam - it is 3 times more expensive than real gold. One kilogram of rose oil is extracted from roughly 3000 kg of roses.