Bulgarian-Italian Cooperation in Archaeological Research and Promotion of Historical Heritage 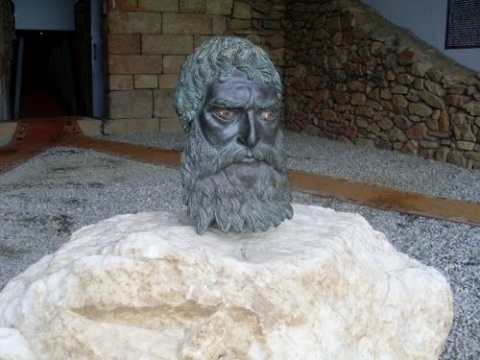 The Italian Embassy provided support to NAM also for the study and conservation of the head of the bronze statue of the Thracian ruler Seuthes III, discovered in 2004 by Georgi Kitov at Shipka. Photo from panoramio.com

Article by Maria Reho, Associate Professor at Bulgaria's National Archaeology Institute and Museum of the Bulgarian Academy of Sciences, for the "International Survey: Bulgaria-Italy" of Novinite.com (Sofia News Agency)

The Italian-Bulgarian expeditions during the last century in north-western Bulgaria have a significant role in the history of archaeological research.

In the period 1941-1943 under the scientific guidance of Antonio Frova, who then acted on behalf of the Italian scientific expeditions to the east and of the Italian Institute in Sofia, were performed excavations in Gigen (Pleven), in the ancient colony Ulpia Oescensium.

We owe Frova the discovery of a thermal complex extra moenia (out of town) and the aqueduct, part of the fortress wall with round towers and decumanus maximus, the main road that crossed the Roman city from east to the west. It was the Italian scientist who wanted to establish in the area of the excavations an antiquarium, currently the Ulpia Oescus Museum, with exposition on the excavation site.

The name of Antonio Frova occupies an important place in the history of studies of ancient painting. Back in the 50's of the last century Frova was the first to report the news of the accidental discovery in Bulgaria of exceptional frescos in late-antique grave in Silistra, ancient Durostorum, and in the Thracian town of Kazanlak.

After a break of thirty years because of the war and the subsequent events, the relations between Italian and Bulgarian scientists were resumed in 1974. The years from 1974 to 1989 represent a period of fruitful scientific cooperation between the Bulgarian Academy of Science and the Italian National Research Council (NSI). An expedition led by Giancarlo Susini from the University of Bologna, revealed a large part of another important Roman town situated around the Danube - the colony Ulpia Traiana Ratiaria, today Archar (Vidin).

These excavations revealed a sophisticated colored mosaic from the third century AD, as well as a small family treasure found under the rubble of a home in Ratiaria, tumbled down in heavy fire - discoveries, occupying today a central place in the exposition of the Regional Museum of History in Vidin. The results of the excavations, published in the 80's by the Department of Ancient History at the University of Bologna in three volumes of the journal Ratiariensia, are now the main source of information about the ancient Ratiaria.

To the Italian-Bulgarian expedition is due the organization of the international meeting on the Moesian and Danube limes, held in Vidin in 1985, which opened new horizons for studies of the Roman provinces.

In the period 1992-1996 within the Agreement of scientific cooperation between BAS and the Italian National Research Council, Vincenzo Rizzo and Dario Monna, scientists from the Institute of Applied Technologies in Cultural Property in Rome and from the Research Institute for Hydro-geological Protection in Cosenza, carried out geo-archaeological, geophysical and seismic surveys of the necropolis Helis in the vicinity of the village of Sveshtari (Razgrad), making a substantial contribution to the study of one of the most famous archeological complexes.

In 1993, again within the same project an international meeting was held in the city of Cosenza where Italian, Bulgarian and other European scientists discussed the interesting topic of the formation and significance of tumuli.

Promotion of the Rich Artistic and Historical Heritage of Bulgaria

Within the framework of cooperation between the Ministries of Culture of both countries and thanks to the support of the Italian Embassy in Sofia, Italian scientists, including Giancarlo Susini, Valentino Pace, Louis Godart, organized major exhibitions dedicated to the archaeological, artistic and historical heritage of Bulgaria that were displayed in prestigious exhibition centers in many Italian cities like Venice, Sassari, Florence, Vicenza and Rome.

The two exhibitions in Rome, entitled 'Treasures of the Christian Epoch in Bulgaria' and 'Treasures of Bulgaria from the Neolith to the Middle Ages', arranged in the preferred exhibition space 'Trajan's Market' in 2000 and the Palazzo Quirinale in 2006 had an outstanding resonance, giving an exclusive forum for Bulgaria in the celebrations of the Great Jubilee and on the eve of its accession into the European Union.

These exhibitions did not only open an extraordinary window for thousands of visitors from around the world into an eminently representative part of the European artistic and historical heritage, reserving a central place for Bulgaria along with Italy and Greece, in the process of establishment and development of European culture, but they also pointed out the crucial role that ancient Rome, like Greece before centuries, had played in the ancient history of Bulgaria and in the whole Balkan region.

The Role of Rome in the Ancient Bulgarian History

The confrontation with Rome, although always connected with domination, has been a constructive point in the ancient history of Bulgaria.

The Roman presence in the north and south of the Balkans, where the provinces of Moesia (15 AD) and Thrace (45 AD) were established, represented for the local population a radical change, which created prerequisites for a second boom of the Thracian civilization.

Rome transformed the systems of state and financial administration, legal and military organization, turned the road that diagonally crosses the Balkan Peninsula into one of the most important arteries of the empire, giving this geographical area a strategic role of the node, connecting the East and the West. With its efficient road network, connected by a system of mansiones (stops) and mutationes (stations for changing horses) and emporia (markets) located on the border between two cities, Rome facilitated and gave new impetus to commerce.

The Roman model of governance of large land estates, with a villa in the center of many production-related activities made rich the aristocrats and the landlords in the southern Balkans, and with their economic prosperity, they managed to occupy an important place in the political, military and religious life of the cities.

The expensive armor, jewelry, fine fabrics and perfumes, silver and bronze vessels, furniture and chariots with master-made ornaments that were part of the expensive fitting, found in the tumuli where the Thracians continued to be buried in Roman times, are the mirror of a wealthy local aristocracy, which totally took up the ways and lifestyle of the Romans and carefully monitored fashion, dictated by Rome.

The flourishing of the two provinces, which culminated in the II and in the first half of the III century AD, was reflected in the rapid development of art crafts and construction. The most important centers of goldsmith's trade in which ancient Balkan traditions merge with the italic and oriental experience were in Pautalia (Kyustendil), Ratiaria (Archar) and Novae (Svishtov) – towns located near famous deposits of gold, silver and bronze in Pautalia and Augusta Traiana (Stara Zagora), marble in Odessos (Varna) - an ancient colony founded by the Miletian Greeks.

Construction activities covered all major towns of Moesia and Thrace, completely changing their appearance. Today we become aware of the dimensions of this change judging by the remains of impressive architectural compounds that appeared after excavations in many towns in Bulgaria. An expressive example in this respect is Plovdiv, the ancient Philippopolis, where the ancient monuments are skillfully intertwined by the Bulgarian architects with the modern city, attracting the attention with their grandeur.

The remains of public and religious buildings at the Forum, the Odeon, the baths and the two aqueducts that brought daily 43 000 m3 of water from the Rhodope Mountains to the city, the remains of the big stadium with a monumental entrance, able to accommodate up to 30,000 spectators, of the theater on the top of Taksim Tepe with its stage overlooking the lower city, of the main temple dominating the city from the hill of Djendem Tepe, where local gods and the emperor were worshipped together, bring back the clear image of a city with deep Thracian roots, transformed by the confrontation with Rome - as some ancient authors say – into the 'largest and most beautiful city of Thrace'

Italy and the Museum of Archaeology in Sofia

With its scientific contribution and substantial economic support, Italy is present in two important points in the centennial history of the National Archaeological Museum of Sofia (NAM). At the end of the ХІХ century the task to put in order the coins from the collection of the National Library, which originated from NAM was assigned to an Italian. That Italian was Domenico Tacchella from Genoa, who in 1868 came to live in Plovdiv, where he developed his own business and in the Russo-Turkish war gained distinction for his generosity and humanity.

Tacchella was a devoted numismatist and had already shown great competence, working at the Library in Plovdiv, where he was appointed in 1882. In his capacity of consultant and later of curator of the antiquities at the Museum of Sofia, Tacchella assisted the purchase of important collections of coins and rare coins, turning the museum's numismatic collection into one of the richest in Europe.

With accurate and hard work on cataloging, he set up a numismatics unit at the museum and developed an entirely new system of coins exhibiting that was maintained in the museum for forty years. Tacchella published many coins previously unknown in the catalogs of major European museums, thus attracting the interest of many foreign scientists in young Bulgaria and its first museum.

In the early 90's of the last century, in a very critical time for Bulgaria and for the museum, the Italian government financed both the work on renovation and repair of the building and the implementation of a brilliant Italian design for the lighting in the central hall and for exhibition of the sculptures, allowing the museum to open to the public and celebrate its centenary.

The Italian Embassy played an important role as well as the architect Attilio Santi of the University of Venice, who organized the installation works of the illumination and exhibition components, manufactured in traditional old Venetian workshops and in the town of Recanati.

The Italian Embassy provided support to NAM also for the study and conservation of the head of the bronze statue of the Thracian ruler Seuthes III, discovered in 2004 by Georgi Kitov at Shipka, in the tumulus Golyama Kosmatka – a work of great artistic value, destined to have a central place in the history of ancient bronze statues and of Hellenistic Thrace.

The project, funded by the Ministry of Foreign Affairs and the Municipality of Siena was implemented in 2004-2005 in the European Centre for Research and Restoration (CERR) in Siena with director Giorgio Bonsanti and scientific leader Edilberto Formigli, a world-famous restorer from Toscana.

As for my personal contribution to the development of the National Archaeological Museum in Sofia where I have been working with dedication since 1983, I am not the one to judge. Other people will draw the line, may be later ...