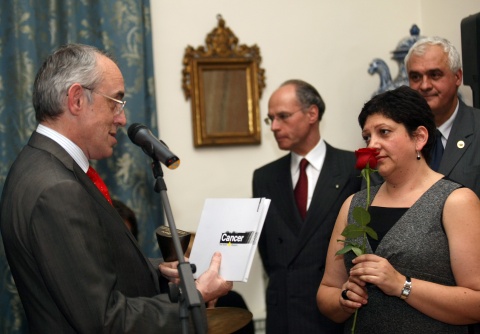 The annual award of the Association of Cancer Patients in Bulgaria handed at a ceremony in the Italian Embassy in 2009. Photo by BGNES

In 2008, I started an anti cancer oriented public opinion awareness campaign in Bulgaria, supported by the medical establishment, the media, the associations of patients and relatives.

I had the possibility to enter in contact with the most significant members of the medical corps in Bulgaria, and to take stock of some brilliant realizations. I was also able to stress, in many occasions, the availability of Italian expertise to help Bulgaria patients.

Therefore, when two very distinguished Doctors from a world-known and leading Italian medical Institution, the Istituto Europeo di Oncologia (IEO), created and directed by Professor Umberto Veronesi - a former Minister of health in Italy - in Milano, approached me in early 2011 proposing a cultural exchange initiative in Bulgaria, I was delighted to offer my co-operation. My wish to improve the cancer situation in Bulgaria was coming true. A three-pronged initiative was defined.

1.         Professors Stefano Zurrida and Ottavio de Cobelli came a few times to Sofia, visited 8 hospitals, and finally identified two Institutions whose characteristics seem to enable them to participate to the project.

The two Institutions are the Lozenets University Hospital and the Tokuda Hospital, the first one public, the second private, both in Sofia. They made clear their availability to participate to some projects.

We believe that they can be perfect partners, with the University of Milano, in an initiative meant to ameliorate the cancer prevention in Bulgaria. I hope that this orientation of Eurama will soon develop into a full-fledged initiative.

I explained the initiative in Istanbul on April 14, 2011, in the framework of the General Assembly of Eurama (Euro-Asian Mastology - European-Asian Society for Breast Disease), to about 90 medical Doctors coming from about 30 countries, including Bulgarian ones. They were very interested.

The initiative consists in a cultural network project between Milano and Eurama on the one side, Bulgarian medical Institutions and personalities on the other.

The goal is to send to Milano, at Eurama expenses, Bulgarian Doctors, nurses and technicians in the breast cancer field to follow specialization courses. Also, tutoring of specialized courses in Bulgaria should be started.

I am convinced that the possibility of Eurama supported fellowships and/or specialist courses in Milano will greatly enhance the strength of the action currently implemented by Bulgaria against cancer, as well as tutoring specialized courses in Bulgaria.

I am convinced of: a) the level of excellence of the struggle against cancer in Italy, b) the extraordinary importance of the realizations of Professor Umberto Veronesi, in Milano and worldwide, in early diagnose of cancer, especially breast cancer, c) the fact that the cancer situation in Bulgaria could and should be improved.

These assumptions made my initiatives inevitable, considering the fact that Italy has always been on the forefront of the effort to help Bulgaria regain the place it has occupied in Europe since centuries, also by supporting its adhesion to European Union and NATO.

2.         Also, we intend to evaluate the conditions for making possible the acquisition of a second surgical robot in Bulgaria (in addition to the one already used in Pleven).  This initiative would start bringing Bulgaria to the level of other countries of the area, and also reduce the trips of Bulgarians traveling abroad to undergo surgery.

The IEO, with its well tested robotic school, is able to teach to Doctors and nurses, and to help to support - through proctoring programs - future surgery with the new robot. The Mayor of Sofia, Yordanka Fandakova, has expressed her determination to act in order to install the robot to be acquired in the First Multifunctional Hospital of Active Therapy in Sofia.

3.         Finally, we intend to establish a Center for cancer early diagnose in Sofia. It should comprise gynecology, urology, mastology and psychological assistance.

I am not a statistician nor a medical doctor. I will therefore not elaborate about the devastating effects of the various forms of cancer in Bulgaria. Just allow me to mention the record newly diagnosed cancer cases recorded in Bulgaria every year. There is also a tangible increase of patients with breast cancer.

As a layman, I am proud to have been able to offer a small contribution to this endeavor.