The Strategy for the Development of Cultural Tourism in Bulgaria 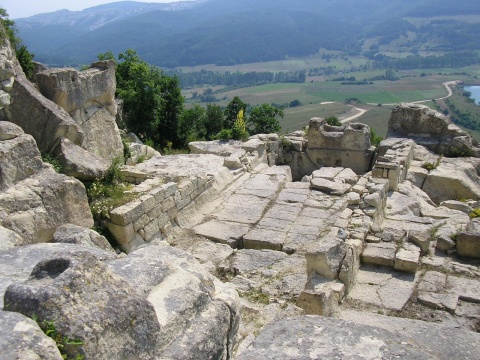 Article by Alessandro Guzzo, international expert for the development of tourism, for the "International Survey: Bulgaria-Italy" of Novinite.com (Sofia News Agency)

""Since the first time we arrived in Bulgaria, to learn the history, the art, the culture and the heritage of this Country and to try to make use of what we learned from the management of Pompeii, we understood the clear difference between the two countries. But the methodology we adopted in this challenging project, as well as the working methodologies we applied, were the same of those we already experimented in the past with success.

In the working methodology, we considered every item of attractiveness not only "per se", but mostly we analysed how it was connected both to the place in which is located and to any other element of interest, analogous but at same time different, present in the area: we were then able to gradually build up several networks and a number of cultural districts (that we later named with the acronym of LOCUS: Local Cultural System), where the tourists, as well as the local inhabitants, could recognize the distinguishing elements of its cultural essence.

We tried to differentiate the features of the identified districts and to connect them each other with a shared mark, or if you prefer, conceiving a new brand for the cultural tourism in Bulgaria. An uninterrupted "fil rouge" is provided by the historical framework, by the persistence of Bulgarian culture that it constitutes the pride of its people and enriches the cultural heritage of Europe.

We like to remember that nothing we are proposing in our work would have been possible if we had not been able to rely on the co-operation, experience, passion, competences of our Bulgarian colleagues. Thanks to their continuous and mutual exchanges and to the shared commitment, we could improve our learning about the Bulgarian cultural heritage.

The over-all strategy we present here is completed by an action plan and implementation programs for most of Bulgarian historical sites.

Even if our effort will reach in the future, only a part of the set objectives, we will be glad to have been able to carry on and complete this project.""

This is an abstract of the foreword written by Prof. Pietro Giovanni Guzzo, past Superintendent of the Archaeological sites of Naples and Pompeii, at the delivery to the Bulgarian Ministry of Culture of the final report of the important study "Strategic Plan for the Development of Cultural Tourism in Bulgaria"

The long course of this project start in 2005, from the general guidelines related to the cooperation between Italy and Bulgaria: in 2006, a formal cooperation agreement was signed between the Government of the Campania Region of Italy, the Bulgarian Ministry of Culture, the Archaeological Superintendence of Pompeii, and the Association of the Construction Companies of Campania Region: major scope of the cooperation agreement was the funding, by the Campania Region, of the study "Strategic Plan for the Development of Cultural Tourism in Bulgaria". After three years of intense activity, works for the Strategic Plan were then completed.

The Plan was originally addressed to the country's internal areas, but the works were gradually extended, in agreement with the Bulgarian Government, to the whole territory of the country. Our work was focused on providing Bulgaria with a primary base of departure, a supporting instrument, related to the best utilisation of the European funds of the Operational Program 2007–2013.

As mentioned, more than ten Bulgarian experts have been involved in the implementation of the study, well known scientists both at national and regional levels: high quality specialist in history and classics, in medieval museums, music and folklore, figurative and minor arts, natural and environmental assets, legal aspects (related to the preservation of cultural heritage), directors of historical and archaeological museums.

A comprehensive analysis of the available accommodation facilities, for tourists and travellers in general, has been also carried out, to evaluate the kind, the quality and the services offered.

The main findings and steps of the study, from an operational point, of view are summarised here below.

The Bulgarian Cultural Tourism Development Plan has the main objective to increase attractiveness and competitiveness of the Country, promoting an increasingly strong link between tourism and culture. This synergy, in order to give significant results needs to be:

extended to the whole territory, including those areas already counting on their natural advantages, such as sun, beaches and mountains.

Bulgaria has large potential for the development of cultural tourism and most of this potential resources have not been yet assessed and developed.

It is necessary a full fledged development plan and serious commitments of al involved institutions in order to eliminate the obstacles to a full expansion of the sector and a full fruition of the positive returns on the economic system, income and occupation.

In order to generate positive effects at structural level through the enhancement of tourist activities, it is necessary to invest in strategic interrelated sectors, such as environment, cultural assets, transport, industrial activities, services, urban systems and planning, and avoiding to realize interventions not included in a logical system framework.

The study start with the first and complete ever made before examination of the resources of the huge cultural and environmental heritage of Bulgaria; this heritage comprises the nine sites, recorded in the UNESCO world heritage list and the sites with historical, archaeological, monumental values, and the parks and natural reserves system.

Cultural offer was integrated by the heritage related to traditions and to the national and popular culture.

In the survey, the quality of offered services has also been assessed, adding it to the operators professional qualification and evaluating the need of a re-qualification, following to a Training Need Analysis, by the means of targeted and qualified training programmes. Support to tourist enterprises has been considered as a further vehicle to the qualification of the tourist offer, if upgraded to the western standards.

Other actions have also been taken into consideration, taking into account the quick changes of international economic system and the recent difficulty of European tourism.

increase of the length of stay,

enhancement of the competitive advantages of Bulgaria, compared to the other regional competitors,

self and flexible organisation of travel,

increase of a demand more oriented to quality products and services and to the value for money ratio (price quality relation),

are examined in the Action Plan, including territorial marketing of the tourism systems, with proposed marketing and promotional activities, both in Bulgaria and abroad, able to enhance the business coming from the traditional tourists originating countries, but also able to create and to develop alternative flows from the new emerging markets.

With reference to this last target, the coordination between public and private entities is crucial in order to multiply the effects of the integrated participation.

In the study, the Cultural tourism expected results are clearly stressed: in fact the natural and cultural assets, both material and immaterial, can represent the engine for the Bulgarian economic enhancement, able to stimulate the economy, not only at local level, but at national level as well.

Culture and tourism, indeed, besides being factors able to create wealth, they have also many indirect effects.

In particular, cultural tourism can activate interdependences within different economic sectors, such as:

Any expense driven by cultural tourists, creates an added value, not only through the interested assets or the requested services, but also in favour of all sectors which are in direct relation, producing therefore a multiplier effect on the Country's economy.

If we examine the process, the tourists' expense go to tourist companies (and therefore to taxes) and from the related companies to the family of the employees, which in turn, through further activities such as general expenses and consumptions for living, create the multiplier effect.

Additional effect related to the development of cultural tourism is the benefit on the unemployment rate, particularly in those areas where the rate of emigration is high and where there are not many job alternatives.

At the same time, the development of tourism products related to culture intend to provide further incomes and economic resources to sustain cultural attractions and to preserve the site.

Cultural tourists, usually visit off the tracks destinations and sites, giving a strong contribution to the de-seasonality and to the increase of areas connected with tourism, particularly for internal and less known regions.

Cultural tourism finally encourages local population to valorise and to preserve their culture and traditions, with renewed pride to their roots.

At macro-economic level, data show that within the EU Cohesion Policy, for the period 2007-2013, Bulgaria will receive 6,8 billions of Euros, deriving from Structural and Cohesion Funds.

Considering that approximately 12% of the Bulgarian GDP comes from the tourism sector (World Travel & Tourism Council source), it is realistic to hypothesize investments in the tourism sector deriving from Community Funds at the same rate (12%), namely 816 millions of Euro.

In order to finance the Strategic Cultural Tourism Development Plan, and comparing the evaluation on the average ratio GDP cultural tourism/GDP tourism, as presented in the study "Art, cultural tourism and induced economy", Price Waterhouse Coopers February 2009, where cultural tourism in England, Germany, France, Italy and Spain has a share of 33,2% compared to GDP tourism, it is possible and realistic to forecast that at least the 30% of the resources, as determined above, will be destined for the development of cultural tourism in Bulgaria, for an amount of 250 millions of Euro.

By the available data in different European Countries, in terms of social and economic effect in capital account, there is an evident leverage outcome of this expense, on the whole of the economy of the sector. In particular, investment's impact on different sectors, forming the tourist compartment, grants, on the average, a multiplier effect of about 4 times the expenses met.

Extending the methodology to the cultural tourism sector, the 250 millions of Euro will be able to determine a whole fallout on the Bulgarian economy of 1 billion of Euro.

Some case studies and best practices showing the validity of financing specific investments in the cultural tourism compartment, are reported here below:

• In Mexico in the region of Michoac?n, thanks to the tripled investments in one year, tourists recorded in the region increased from 3,4 million in 2002 to more than 7 million in 2007, 32 % of which are recorded as cultural tourists. In the same period, international tourists show a strong increase, from 104.000 to 1,1 million. Length of stay and daily expenses are increased, leading the whole economic impact from 271 millions of USD in 2002 to 1.276 millions of USD in 2007. Tourism contribute to GDP increased, until almost the 9%, higher than the national average, and 40.000 new jobs were created.

• In 2007, the European Union chose "Luxembourg and the Great Region" (including 5 different regions in Luxembourg, Belgium, France and Germany) as the European Capital of Culture. 500 projects were implemented, 130 of them were cross border cooperation projects, producing 3,3 million of visits, distributed all over the Great Region.

In Luxembourg, the hotel occupancy rate recorded an increase of the 6% and the visitors expenses contributed to more than 56 million of Euro in the local economy.

The last commitment of the original agreement is now ready to begin: the implementation of a Pilot Project to verify in practice the soundness and the strengths of the different suggestions included in the Plan: the Bulgarian Ministry of Culture made its choice and one of the 13 LOCUS has been chosen for further detailed and practical planning: the LOCUS chosen is "The Sword and the Cross: Perperikon and the Orpheus burial place".