Bulgarian-Relations from the Times of Garibaldi and Mazzini 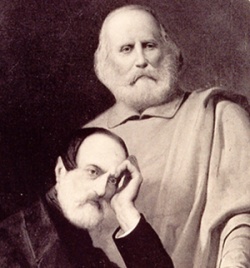 Mazzini and Garibaldi were a great source of inspiration for the Bulgarian freedom-fighters. Photo from turindamsreview.unito.it

In October 1876, when the general public in Europe was finally convinced of the tragic end of the April Uprising, the figures of the Bulgarian Central Charity Society in Bucharest, who set the uprising in motion, got the memorable letter-telegram (currently kept in Sofia):

The Italian people cherish for your people sympathies deserved because of your woes and heroism.

I am grieving over not being able to take part in your battles in person.

I wish you perseverance in your great and noble mission and remain sincerely yours:

From the island of Caprera the legendary Italian spoke up in support of the Bulgarian people's struggle for liberation.

Ten days before, the Bulgarian emigrants in Bucharest had addressed a warm message full of hope:

The courageous voice you repeatedly raised in defense of the oppressed Slavs in the East strengthened even more our respect and admiration for the great Italian patriot.

Your brilliant exploits for the liberation of Italy and your today's warm sympathies for other peoples who suffer assign the eternity of your name in the world history.

The Bulgarian Central Charity Society (BCCS) in Bucharest on behalf of the Bulgarian emigrants in Romania is asking the great Italian national to be the interpreter of our feelings of deep gratitude and high respect for the Italian people for taking such an active part in our liberation from the most detestable yoke in the world ...

As it could be seen from the archives, Garibaldi, who was long known and made an idol for the Bulgarian revolutionaries, learned quite early about the Bulgarian people and its sorrowful fate. Credit for this have Bulgarians who had accompanied him from the very beginning of his long standing and dramatic fight on the Apennines that had to end with the freedom and unification of the scattered Italian states.

The legendary Italian fascinated many Bulgarian figures of the already organized Bulgarian movement for national liberation. Georgi Rakovski, Lyuben Karavelov and Hristo Botev demonstrated their sympathies for the leaders of the Italian liberation movement.

With prominent liking for the Italian experience, Lyuben Karavelov in his brochure 'The Bulgarian Voice' published in Geneva in 1870, urged for the establishment of a Bulgarian organization based on the example of Young Italy (La Giovine Italia). 'We have to keep our eyes on the great deed of Mazzini and Garibaldi', he concluded.

The Bulgarians were interested not only in Mazzini's social views but also in the ways to achieve our own democratic republic.

In response Garibaldi addressed a proclamation to the Slavic nations, which after many years could still be found even in remote Bulgarian villages.

Recently discovered documents contain the names of Marco Antonio, a close friend of Garibaldi's and Menotti Garibaldi (Garibaldi's son) giving advice for a plan against the Ottoman rule, for supply of guns and ammunitions for the band of Hadji Dimitar and Stefan Karadja that crossed the Danube in 1868 and was destroyed and annihilated to the last man by the Ottoman troops.

Legendary remains the hearsay about the meeting between Rakovski and Garibaldi in Bucharest in 1864 where the revolutionary leader Hadji Dimitar was introduced to Garibaldi. As early as 1900 the Bulgarian periodical Letopisi, (v. I, page 10) (Chronicles) published the memoirs of translator Marko Balabanov entitled 'At Mazzini's' with Mazzini's: 'You Bulgaria! Shed your blood and be certain that you will gather a rich harvest'.

Articles and notes by Bulgarian figures followed in Dunavski Lebed (Danube Swan) with Raovski's acknowledgements that Garibaldi was 'a pure, good hero' and the appeal to set up again a regiment of 1000 men, two cannons and two surgeons and do what Garibaldi did with his famous Red Shirts in Sicily. There was also Karavelov's poem:

There is also the reminiscence of a teacher from the time of the Bulgarian national revival of the everlasting Hristo Botev: 'Of all Italians Botev liked to tell us about Garibaldi and Mazzini, saying 'If someone like Garibaldi was leading us we could destroy the whole of Turkey ...'. This interest was illustrated by the activity of subscribing 370 Bulgarians for the publishing of Mazzini's biography (A letter of January 21, 1875).

Garibaldi's charm grew even stronger with the publication of his Memoirs in the Russian language and the Red Shirts of the Garibaldeans became so popular that the people started calling the red color 'Garibaldi color'.

Many songs were published praising the Italian doings with refrains about Garibaldi, Mazzini and Freedom, while the issues of the newspapers Tsarigradski vestnik (Istanbul News), Bulgaria, Dunavska zora (Danube Dawn), Narodnost (Nationality), Maritsa and Macedonia communicated the advice of Garibaldi and Mazzini to the Bulgarians: 'Don't forget that Turkey is strong, moreover, it is being supported – for ill fortune and to the shame of the European civilization – by well-known great countries.'

Garibaldi's warm feelings were underpinned also by the Bulgarian participation in the battles for unification of Italy. Some new facts about our contribution have already been published (Pls. see Georgi Neshev, Giuseppe's Volunteers – Bulgarians in Garibaldi's Squads., Otechestvo publishing house, Sofia 1988, 173 p.) and the find of Enrico Bertini (Garibaldi's letter about a repetition of The Thousand campaign this time transferring the fight for national liberation among the people from the Lower Danube and the Balkan mountains) definitely indicates Garibaldi's intentions to make a landing on the Balkan Peninsula.