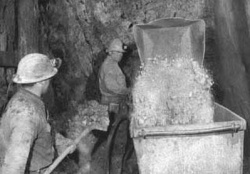 Italy's Prestavel mine had been exploited safely since the 16th century for the production of silver galena. In 1934, decisions were made to extract fluorite. Photo by Stava 1985 Onlus Foundation

An Interview with Graziano Lucchi, President of the Stava 1985 Onlus Foundation, for the "International Survey: Bulgaria-Italy" of Novinite.com (Sofia News Agency)

Graziano Lucchi is the President of the Stava 1985 Onlus Foundation to which the then President of Italy Carlo Azeglio Ciampi gave his high patronage of the Head of State for the duration of his mandate, and in 2010 the Foundation was awarded the international prize Alexander Langer.

The collapse of the tailing pond of Bulgaria's zinc and lead mine Plakalnitsa located above the village of Sgorigrad and the town of Vratsa released a mud mass of 450 000 cubic meters that swept over an area of 7 km, causing the death of hundreds of people and considerable material and environmental damages. This happened on May 1, 1966.

The collapse of the tailing ponds of the fluorite mine Prestav?l located above the populated areas of Stava and Tesero in Italy released a mud mass of 180 000 cubic meters that swept over an area of 4 km, causing the death of 268 people and considerable material and environmental damages. This happened on July 19, 1985.

Two quite similar disasters: both were caused by the collapse of the operating tailing ponds of the mines, both were foreseen or foreseeable and both caused unforgivable casualties.

What is the goal of the Stava 1985 Onlus Foundation?

To remember the disaster in Stava so that the death of the 268 men, women and children, who perished on July 19 in Stava Valley, becomes a warning; to disseminate information and knowledge about this and similar disasters in order to avoid such calamities in the future.

What made you to get in touch with the community in Sgorigrad and Vratsa?

We wanted to receive more information about that disaster about which we learned in 2003 from a report of the United Nations Economic and Social Council. The report contained information on the collapse of the tailing pond of a mine in Bulgaria in 1996 that caused the death if 107 people.

Only after we made some checks we found that the disaster happened in 1966, not in 1996. Then we contacted the mayor of Sgorigrad, Nikolay Iliev, who with the assistance of Mr. Petar Petrov, speaking Italian, provided the requested information and expressed hope that a relationship of solidarity and fraternity could evolve from the tragic fate of the two communities.

What were your first initiatives?

We visited the site of the disaster in Sgorigrad at the end of November 2004. As a result of this visit, the Municipal Council of Tesero, upon proposal of the then mayor, Gianni Delladio, decided to cover part of the costs to build an alpine hut and a 'Track of brotherhood Tesero – Sgorigrad' in the mountain above Sgorigrad and Vratsa opposite to the place of the tailing pond, which collapsed on May 1, 1966.

Plates with inscriptions in Italian, Bulgarian and English languages provide information on the similarity of the disasters in Sgorigrad and Stava Valley.

How were you received in Sgorigrad and Vratsa?

During the first and the follow-up meetings we were always received very friendly and affectionately. Our delegation was received by the then deputy mayor Momchil Mladenov and in the next year – 2005 – Mr. Iliev took part in Tesero and Stava on the occasion of the twentieth anniversary of the disaster.

We went back to Bulgaria in 2006 to participate on the first of May and commemorate the 40th anniversary of the disaster, as well as for the opening of the alpine hut and the 'Track of brotherhood Tesero – Sgorigrad'. For the first time in 40 years on this occasion was held a memorial service for the victims of Sgorigrad. During this same visit we started collecting information for a book and documentary about the similarities of the disasters in Sgorigrad and Stava.

In 2008 we accompanied a team of the Italian television RAI from Trento to Sgorigrad and Vratsa for shooting the documentary and we were received by the mayor of Sgorigrad, Asen Petrov and by the mayor of Vratsa, Totyu Mladenov, now the Minister of Labor and Social Policy in the Bulgarian Government. RAI made the documentary 'Stava on the Balkans', while the publishing house Arca from Lavis published the book 'Sgorigrad – Stava. Identical Disasters'.

Where did you present these works?

The documentary and the book were presented at three meetings organized in Bulgaria with the support of Petrolvilla Group. The first meeting was held in a format of a scientific and technical workshop at the University of Architecture, Civil Engineering and Geodesy and was organized by Prof. Dimitar Toshev, Head of Hydrotechnical Department at the University and Chair of the Bulgarian Commission on Large Dams.

About sixty participants, students and lecturers at the university attended the workshop, which was opened with speeches of the Rector Prof. Dobrin Denev and the Ambassador of Italy to Bulgaria His Excellency Stefano Benazzo.

The second meeting was held in Vratsa, at the Regional Museum of History for north-western Bulgaria and the third – in Sgorigrad on May 1, 2009, the anniversary of the disaster. At the end of the memorial service for the victims of the disaster of May 1, 1966 a memorial in their honor was opened in the churchyard.

The ceremony was attended by the Ambassador of Italy to Bulgaria His Excellency Stefano Benazzo and a delegation from Tesero Municipality and Stava 1985 Onlus Foundation led by the deputy mayor Giovanni Zanon. Then, the documentary 'Stava on the Balkans' dubbed in Bulgarian was shown in the packed House of Culture in Sgorigrad.

What was the response of the people in Sgorigrad and Vratsa?

I could say that both the documentary and the book were appreciated by all. Many people thanked us for what we did to bring back the memory of the disaster which had been buried in oblivion for forty years.

The then mayor of Vratsa Totyu Mladenov, who received the Ambassador of Italy and the delegation from Tesero Municipality and Stava 1985 Onlus Foundation, expressed his gratitude for the close cooperation and solidarity with the Sgorigrad/Vratsa community and delivered an eulogy speech in praise of the initiatives implemented by Stava 1985 Onlus Foundation and particularly of the documentary made by the team of RAI from Trento.

He also expressed his disappointment of the fact that at that time there was no information on the disaster and the cruel lesson learned from Sgorigrad/Vratsa was unable to prevent the disaster that happened 19 years later in the Stava Valley. Mayor Mladenov together with the mayor of Sgorigrad Asen Petrov visited Tesero and Stava and took part in the ceremony for the 24th anniversary of the disaster in Stava.

How did this relationship develop further?

In 2010 on the occasion of the anniversary of the disaster in Sgorigrad, the main square there was called Tesero Square, the name of our municipality. The decision of the municipal administration of Vratsa and the community in Sgorigrad was very significant and sealed the relationship of fraternity connecting our communities that had suffered identical disasters.

What other joint initiatives do you plan?

This year we want to participate in the ceremony for the anniversary of the disaster in Sgorigrad and we would like to extend our special thanks to the municipal administration of Vratza and to the people of Sgorigrad for giving the name Tesero to the main square of Sgorigrad.

Moreover, we proposed to the municipal administration in Tesero to call the square in Stava Sgorigrad Square, because after the reconstruction it still has no name. We consider that a twinning project between the municipalities of Tesero and Vratsa could be the best way for implementation of our joint initiatives and perpetuation of the natural relationship of solidarity between our two communities affected by identical disasters.

Do you plan any other initiatives?

Training is an area that is very close to our hearts. Unfortunately, we have to admit that regardless of the cruel lessons learned from Sgorigrad and Stava, severe accidents continue to happen with tailing ponds. After the disaster in Stava, 46 accidents happened in various parts of the world with thousands of casualties and enormous material and environmental damages.

The last was the accident in Kolont?r (9 victims, 120 injured, significant devastation and severe environmental damages caused by mud mass of about a million cubic meters slipping as a tsunami after the partial collapse of the tailing pond for disposal of waste products from bauxite processing at the aluminum plant in Ajka, Veszp?m region in western Hungary).

We are concerned with the recurrence of such accidents, which in most of the cases – as in Sgorigrad and Stava – are due to negligence and underestimation of the risk, insufficient technical knowledge and lack of interest from the management of operations and the public administrations that are in charge of control.

The objective of the master program Sigeo is to facilitate the dialogue between technical experts involved in the design, construction, management and control of geotechnical structures, encouraging interdisciplinary approach that takes into account both the technical and the social and economic efficiency of the site.

The balance of this experience is on the one hand positive, given the unanimous consent and expressed high appreciation from the lecturers and managements of the participating universities, and on the other - negative, taking into account the limited number of the enrolled students.

Therefore, the Lecturers' College for Master's Education believes that the initiative should continue by extending the possibility of teaching in other European universities and improve the training with seminars and refresher courses for graduates who are already working, whether alone as freelancers or as professionals in companies operating geotechnical facilities (such as mine tailing ponds) or as public administration employees in charge of supervision and control.

In the spirit of the provisions of the European Directive 2006/21/EC regulating the management of waste from extracting industries (adopted in Italy by virtue of Legislative Decree No. 117 of May 30, 2008), which aims to establish a specific legal framework for this particular waste and also to encourage scientific research in this area, based on the contacts already established in Bulgaria, we would like to launch a new project for postgraduate education with the cooperation of the Italian universities that set up the Sigeo master program and the University of Architecture, Civil Engineering and Geodesy in Sofia.

The cooperation between those universities with the support of our foundation and of the municipalities of Tesero, Vratsa and Sgorigrad and under the auspices of the Italian Embassy in Bulgaria could serve as a basis for the establishment of a real 'School for specialization' organizing postgraduate training courses for graduate students and technical professionals and engineers from mining companies and public administration, who in Bulgaria, in Italy, in Europe and elsewhere will be in charge of the safety of tailing ponds and other waste disposal facilities, inclusive of those that have been decommissioned or abandoned.

Of course, we cannot hide the difficulties that accompany such a project and we will be grateful to anyone who would support its implementation. However we cannot afford to be defenseless and helpless witnesses of the recurrence of these accidents.

After the disaster in Stava, which was perhaps the worst in the world, there were several serious calamities in Europe (if confining only to Europe): in Stara Zagora in Bulgaria on March 1, 1992; in Aznacollar and in Huelva in Spain on April 25 and December 31, 1998; in Baia Mare and in Borsa in Romania on January 30 and March 10, 2000; in Aitik G?llivare in Sweden on September 8, 2000; and the last one in Kolont?r in Hungary on October 4, 2010.

Too many disasters, too many victims, too much environmental damage. We must and we can do so that the lessons learned and our common experience accumulated in Vratsa and Sgorigrad, in Tesero and Stava to protect us from other pains and devastations to humankind and the environment.