On the Giants' Shoulders: Italian Science and Technology 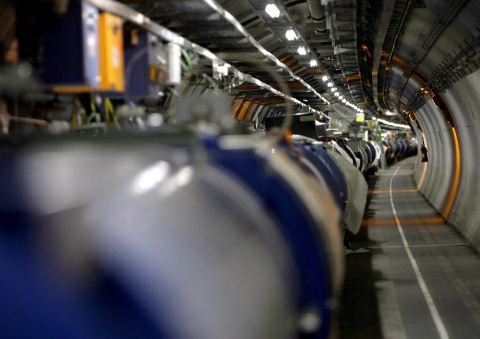 View of the LHC (large hadron collider) in its tunnel at CERN (European particle physics laboratory) near Geneva, Switzerland, 31 May 2007. EPA/BGNES

It’s on the shoulders of many giants that Italy built -and is still building- its own scientific and technological equipment. Through the centuries, figures like Leonardo, Galileo Galilei, Alessandro Volta, then Enrico Fermi and Guglielmo Marconi until to the contemporaries Carlo Rubbia, Nicola Cabibbo, Rita Levi Montalcini (just to cite few names) testify to a culture that made Italy great in the world: the same culture that still today represents the most precious heritage for the young generations.

The Italian scientific culture takes pride not only in a huge number of personalities of extraordinary moment, but also in a distinctive characteristic that comes up again today in all its importance and actuality: a special attention toward a unity of the knowledge, based on that Humanism of Science (of which we need deeply feel in our time), that doesn't build barriers among the disciplines, but conversely looks for common values and paths of dialogue.

This is still a mission for the 79 Universities present in the Country and for institutions like the Accademia dei Lincei (the oldest in the world), CNR (Research National Centre), the Istituto Italiano di Studi Filosofici (Italian Institute of Philosophical Studies in Naples).

The last one represents a case particularly significant in this sense, as it is engaged actively in science, gathering the contribution of experts and Nobel prizes, and publishing researches on frontier issues (biology, bioinformatics, quantum physics, astronomy etc.), but always keeping its own philosophical matrix in the spirit of a new scientific humanism.

In a quick and incomplete review of the main Italian research institutes, CNR represents the largest organization, with its 4.000 researchers operating in more than 100 institutes, where study and specialize 3.000 more young researchers.

The nature of CNR is multidisciplinary and includes a wide number of scientific sectors, from Environment to Energy, from Agro-food to Medicine and Life Science, from Materials and Devices to Information and Communication Technology, from Biophysics to Biometeorology etc.

The researches oriented to socio-economic issues go side by side with the projects "curiosity driven".

The 70% of the annual budget is assigned to the scientific initiatives defined as strategic by the National Research Programme: in particular, the 20.5% of the funds is assigned to Earth and Environment; the 5% to Energy and Transport; the 7% to Agriculture and Nutrition; the 15% to Medicine; the 9% to Molecular planning; the 19% to Materials and Devices; the 6% to advanced Manufacturing Systems; the 7% to Information and Communication Technology; the 5% to Life Science.

ENEA is the Italian Agency for research and technologic innovation in the fields of energy, environment and new technologies: in particular, it is engaged in strategic areas like Nuclear Fusion and Fission.

No wonder that in its laboratories in Frascati (where the complex machine “Frascati Tokamak” operates) it has been studied for so long the reactor “Ignitor”, that many international experts consider the most effective system to produce the nuclear fusion: on this experimental reactor counts today the Italian Ministry of Research, that has just decided to develop Ignitor in collaboration with the corresponding Russian Ministry.

INAF (National Institute of Astrophysics) is engaged in the fields of Astronomy, Radioastronomy, Space Astrophysics and Cosmic Physics, in collaboration with Universities and international or national scientific institutions (among them, the Italian Space Agency).

Astroparticle Physics is the advanced scientific field which marks the convergence between Astrophysics and Particle Physics, therefore it represents the common area of expertise for INAF and INFN.

INFN (National Institute for Nuclear Research) is one of the most influential and prestigious scientific realities in the world: it is mainly engaged in Subnuclear Physics and in the related instruments or technologies, in close collaboration with Universities and both international and national scientific institutions.

In one of these, a neutrino beam generated at CERN in Geneva, after a long way trip of 730 km at the speed of light, reaches the Opera large detector at LNGS to allow to study the phenomenon of the ‘neutrino oscillation’.

But INFN is also co-founder of the great observatory (interferometric detector) “Virgo”, which stands nearby Pisa and represents one of the most sophisticated facilities in the world as regards the research on gravitational waves.

INGV (the National Institute of Geophysics and Vulcanology) is engaged in the fields of Seismology, Vulcanology and Environmental Geophysics: it is considered among the most prestigious and influential in the international Earth Science sector.

Interdisciplinarity is a peculiarity of the young IIT (Italian Institute of Technology), set up to strenghten the competitive capacity of the national technological system, especially in the fields of Advanced Robotics, Drug discovery, Energy, Smart Materials, Nanobiotech facilities, Neuroscience, using innovative methods and internationally excellent human and instrumental resources.

In the Life Science operates also TELETHON, a reality specialized in the genetic diseases. From 1990 until today, all its activities (financed by private donations) got materialized in 2.261 research projects which have reached important goals in the cure of 454 genetic diseases, including some rare degenerative pathologies.

Last, but not least, ISS (Superior Institute of Health) which is the leading technical and scientific public institute of the Italian National Health Service: the ISS conducts scientific research in a wide variety of fields, from cutting-edge molecular and genetic research to population-based studies of risk factors for disease and disability.

Research priorities are based on those set forth in the National Health Plan. The Institute is also involved in several major clinical trials, which are frequently conducted in cooperation with hospitals and the very important network of the Scientific Institutes for Research and Care (IRCCS).

It's not easy to evaluate a national research apparatus: one of the most trustworthy indicator consists in the number of the citations, obtained by the scientific articles (present in the peer reviewed magazines).

The recent rating of the British Royal Society puts Italy at the 6th place for its International scientific production; the rating elaborated by SCImago places Italy at the 8th position, after USA, United Kingdom, Germany, China, France, Japan and Canada (each of these nations but Canada has a GNP higher than the Italian one). Anyway, by number of publications, Italy confirms a top performance, with a performance worthy of a G8 level.

Also by giving a look at the “Top Italian Scientist” rating, which considers all the researchers (including the ones currently working abroad), the results are unequivocal: the number of Italian scientists having an H-index higher, is larger than 1.800.

A further criterion of evaluation measures the efficiency of the scientific “super Powers”, comparing the productivity with the funds to the research.

Considering the total spending (public and private) in research and development, Italy is placed at the 9th position (after the six Countries with the highest GNP, Canada and South Korea); but, regarding only the funds for academic research, the OECD data place Italy again at the 8th position, as for the citation index.

The Italian system of research is more and more called to promote development and innovation.

CNR promotes and sustains the creation of spin-off enterprises, in order to exploit economically the results obtained by its own researchers: in a few years time, CNR produced 47 research spin-offs in the field of nanotechnology, biomedical, biotechnology, environment, ICT, pharmaceutical, microelectronics, telecommunications.

But the creation of start-ups and spin-offs is not the only way to transfer knowledge and technologies to the market.

The case of the Particle Physics (with some other areas of the Big Science, like Astrophysics and Space Science) is very interesting: these researches “curiosity driven”, which are considered the most far from the market (so called “blue sky”), prove in fact the existence of other new ways to built a dialogue with the enterprises.

The sophisticated research in Particles Physics needs today the usage of highly complex instruments, like the particle accelerators, in which the involvement and the cooperation with the industries are essential: both research and industry have offered fundamental contributions to the most complex and biggest accelerator of the world, the Large Hadron Collider (LHC) of CERN.

Here, working side by side with the researchers, the Italian industries face the extraordinary technological challenges of the project, and acquire both a background of competences and a significant competitive asset: so, the progresses achieved by LHC in the fields of microelectronics, superconductivity, ultra-vacuum, ultra-cold, ICT, nanotechnology, civil engineering, etc., can be transferred today in advanced and competitive products in the global market.

The Italian Physicist Edoardo Amaldi, one of the closest collaborators of Enrico Fermi at the famous Roman School of Via Panisperna (in Rome), at the early 1950's understood that only a collaborative effort between several countries could give Europe a competitive role in fundamental research.

So, Amaldi began one of the strongest advocates in creating a great European particle accelerator: he took advantage of his capacity as vice-president of the International Union of Pure and Applied Physics to back the idea. Amaldi was (with the French physicist Pierre Auger, director of the scientific section of UNESCO) the driving force for a project that was attractive, but which had to overcome difficulties and opposition at both the scientific and the governmental levels.

By early 1952 an intergovernmental conference established a provisional organization which took the name of the Conseil Europ?en pour la Recherche Nucl?aire (CERN): Amaldi was elected General Secretary of this organization and he supervised all of the crucial phases in the infancy of the new institution, including the early stages of work on the laboratory site, on grounds allocated by the city of Geneva.

He left the position when CERN entered into official existence in September 1954, led by the desire to revert to more active research work in physics; but in 1963 he created the European Committee for Future Accelerators, which was an independent body charged with planning new machines to be built in Europe (both at CERN and elsewhere), and he was President until 1969.

He headed up the particular group that planned the new 300 GeV proton synchrotron for CERN in the late 1960s – a project approved by the member states in 1971, with Amaldi in charge as president of CERN Council.

Simultaneously occupying important positions both at INFN and at CERN, Amaldi sometimes had to make delicate choices, balancing resources between domestic developments and international co-operation.

This was evident when a decision had to be taken between launching a great effort for a new Italian proton synchrotron or giving Italy’s support to the project for the 300 GeV machine in Geneva. In this instance he was strongly in favour of the CERN project, convinced that priority in big science had to be granted to Europe.

In the early 1960s the project of a joint European effort in space was being discussed: Amaldi took an important role also in launching the idea and pushing it through scientific and political circles. As a result, in 1964 the European Space Research Organisation was established, which later gave birth to the European Space Agency.