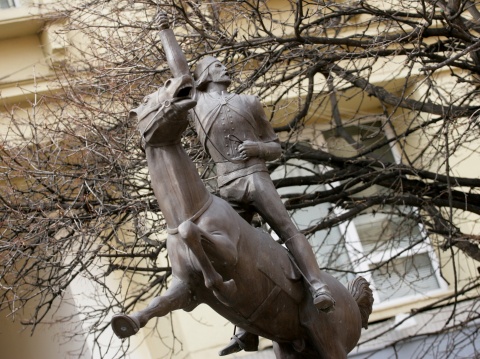 The monument of Giuseppe Garibaldi on the Garibaldi Square in Sofia. Photo by BGNES

Article by Ambassador Stefano Benazzo on the activity of the Embassy of Italy in Bulgaria in favor of Roma integration for the "International Survey: Bulgaria-Italy" of Novinite.com (Sofia News Agency)

Italy's presence in Sofia goes back a long time.

Nonetheless, when I arrived in Bulgaria to assume my duties, I thought that some specific Italian additions might embellish the city. I therefore wish to mention two initiatives I managed to carry out. Of course, none of them would have been possible without the help of Mayor Yordanka Fandakova and of Chief Architect Petar Dykov, to whom I am deeply in debt.

The first one is the "Wall-toWall Poetry" project. Its goal was to enable the 26 EU Embassies in Sofia to affix a symbol of their respective national poetry heritage on walls in Sofia, in connection with the EU motto "United in Diversity".

I opted for nine verses of the "Divina Commedia" of Dante Alighieri, which happened to sit on my desk for about 8 years of my school and University studies. I thought they were appropriate for the Bulgarian youth. The verses are in Italian, Bulgarian English. The plaque was inaugurated in 2009 on the wall of the Vivacom "Telephone Building", in Uliza Gurko n. 4, thanks to the CEO of the Company, Bernard Moscheni, who was kind enough to accept enthusiastically my proposal.

The text inscribed on the plaque is the following:

"You must now free yourself from sloth",

the Master said; "because men do not achieve fame

sitting on down or under quilts;

and whoever his life consumes without acquiring fame

leaves only such trace of himself on earth

as smoke does in the air or foam upon the water.

Therefore straighten up: do overcome your anguish

With the spirit that o'ercometh every battle

Unless its bodily weight crushes it down".

Another initiative I am proud of is the erection of the Giuseppe Garibaldi statue on horseback, in Garibaldi Square in Sofia.

Its genesis is simple. Being a sculptor myself, I got to know and appreciate Georgi Chapkanov, the author of the Santa Sofia statue in the center of the City. He told me of his decade-old wish to have a statue of Garibaldi in the Square bearing that name. I found the sponsors, we got the City permissions.

And in June 2010 Prime Minister Bojko Borissov and the President of the Italian Council of Ministers Silvio Berlusconi inaugurated the statue. I find it beautiful. Georgi has managed to place it harmoniously in a small square, transforming it. I do believe that we offered additional esthetic value to the City of Sofia.

One should never rest on his or her realizations. I have another project: erect a monument to the Italians workers who came to work in Bulgaria (even before 1878) to participate to the industrialization of the Country, building hydroelectric plants, railways, bridges, stations, etc., as they have done in many places in the Balkans, in Russia, and all over the world. I hope it will become real.

I tried to analyze the reasons behind my endeavor to leave some signs of Italy in this town. True: I have participated, years ago and in other postings, to the erection of a huge Arnaldo Pomodoro sculpture, and I was responsible for building one of our Embassies. Maybe I like to leave something tangible behind instead of just paperwork? Maybe because some of my ancestors were engineers and builders? Maybe because, in another life, I was a humble worker building cathedrals? Maybe because I like to build models of ancient wooden churches? I do not know......