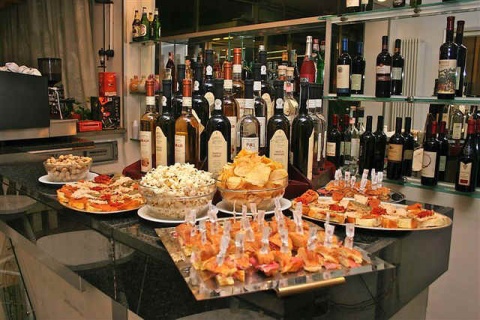 The experience of the aperitivo (ap?ritif) is a long-established Italian tradition. It is popular amongst not only the young and fashionable set but also among the more mature and sophisticated.

Literally, aperitivo is a pre-meal alcoholic drink which is intended to stimulate the appetite, as Bulgarians know very well, thanks to their rakia. The word is derived from the Latin verb aperire, which means "to open." An ancient version of the modern aperitivo was already popular in Ancient Rome, the mulsum, a mix of wine and honey. But the origin of the aromatized wine dates back as far as 4.000 b.C. when the wine obtained from spontaneous grapes was mixed with wild berries in order to improve the taste.

At the beginning, at least in Europe, natural flavourings were obtained from the local flora (Alpine flowers like gentiana and achillea); it then became quite frequent to use exotic spices imported from India and Africa (e.g. cinnamon, ginger, vanilla). Finally, the bark of the cinchona plant, or chinabark, from the Andes in South America came to be used thanks, to its tonic and digestive properties.

According to the records, the aperitivo first appeared in 1786 in Turin, Italy, when Antonio Benedetto Carpano invented vermouth in this city. Vermouth (French word from the German Wermutkraut, referring to Artemisia absinthium L.) is obtained from wine aromatized with herbs and spices. Later, vermouth was produced and sold also by well-known companies such as Martini & Rossi, Cinzano and Gancia (all located in Piedmont). Since then, vermouth has become one of the symbols of Turin and of the Piedmont Region. In the late 19th century, aperitivi started being served in fashionable caf?s in Rome, Venice, Florence, Milan and Naples and by 1900 they had become popular all over Europe and in the United States.

Nowadays, "Prendiamo un aperitivo" (Let's have an aperitivo) is the typical expression if you want to meet up with friends in a casual way. It gives the opportunity to socialize and relax while having a snack before dinner (but sometimes an aperitivo can be considered a light dinner itself).

What drinks make the right aperitivo? Well, first of all there are the classic non-alcoholic ones: bitter carbonated drinks like Crodino, Campari Soda and Sanbitter come already bottled as soda drinks. The Martini - now the aperitivo par excellence - can be drunk straight, on the rocks or be used to make cocktails like the dry Martini (vermouth and gin), "Negroni" (vermouth, gin, Campari and soda water) or "Manhattan" (vermouth and whisky). Aperol and Campari can be mixed with different sodas and spirits, too.

But a lot more mixed long drinks are always available. Sparkling wine cocktails are among the most agreeable drinks to enjoy. They are the perfect celebration drink and a great way to start an evening. Use chilled wine. Any liqueur can be used to flavour it.

Glasses are important, too. Always use a glass and never serve your aperitivo in coloured glasses as they detract from your drink. If possible, glasses have to be chilled in the refrigerator before use or filled with ice during preparation of the cocktail. The "Martini" glass is well known (V-shaped with a long stem to keep the drink cool); champagne flutes for sparkling drinks/cocktails, old-fashioned tumblers, highball glasses and large goblets should be used for serving respectable aperitivi, too. Garnishes need to be simple yet appealing.

Recently, Italians have been switching to wine as an aperitivo. Bars can offer a wide variety of wines by the glass. Prosecco, the favorite pre-dinner sparkling wine, can be offered mostly alongside light and breezy whites (e.g. Pinot, Verdicchio, Vermentino, Tocai etc.). Ros? wines are also becoming quite popular as aperitivi.

Italian bars serve a wide assortment of salty finger food during aperitivo time, which is typically from 6 p.m. to 9 p.m.. They usually charge for the wine or drinks, but not for the food, which is supposed to complement the bar offering. Buffet is all you can eat.

Piadine and pizze cut into bite-sized portions can be served on plates with olives, nuts, crackers, parmesan cubes, p?t? and tiny sandwiches. Puff pastry appetizers will be displayed along with breads, breadsticks and different baked goods. The buffet can practically range from simple chips and ol