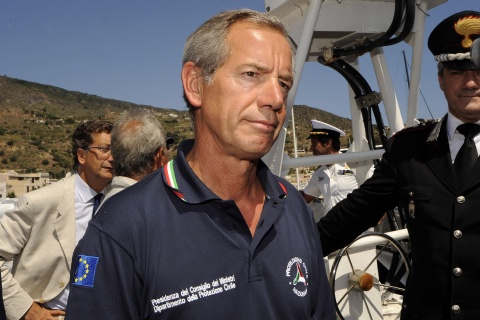 Italy's Civil Protection Chief Guido Bertolaso is shown on the island of Lipari, Italy on 17 August 2010, a day after it was hit by a earthquake, measuring 4.6 on the Richter Scale. EPA/BGNES

Over the past twenty years the occurrence of natural hazards around the world has quadrupled, with more than five hundred natural disasters only in the past year. The devastating impact that natural and man-made hazards have on societies around the world is particularly relevant in the developing world, where countries are experiencing rapid population growth and intense urbanization but where many areas at risk have no access to hazard or vulnerability maps.

A global effort is needed to support prevision, prevention and mitigation of natural disasters around the world, as has been stressed by the European Commission on several occasions.

Because of its morphological structure and the high seismic activity in its territory, Italy has a long history of environmental disasters caused by man (Vajont tragedy).

This has encouraged the development of a special focus and expertise on emergency prevention and management, which has resulted in a world-class civil protection system which has performed admirably also outside national territory, as universally acknowledged with regard, for example, to Italy's commitment in tsunami-stricken South-East Asia.

The subject of civil protection has yet to become fully familiar to institutions, especially from an organizational perspective. Many countries still reason in terms of a "public emergency" concept.

The national organization in Italy is the Civil Protection Department (Dipartimento della Protezione Civile), which is responsible for the prediction, prevention and management of extraordinary occurrences. This institution, both in peacetime and in emergency situations, makes use both of existing forces and of a truly significant number of volunteers.

In Italy, its structure is that of a "National Service", a complex system that includes all the facilities and activities put in place by the State to protect lives, property, towns and the environment from damage or the threat of damage resulting from natural disasters, catastrophes and other events of a similar nature. The system's functions comprise the prediction and prevention of the various risk scenarios, the rescue of people and all activities aimed at overcoming emergencies.

Over the years, the responsibility for civil protection has progressively moved from the State to local governments. The main stages in this process have been the legislative decree No. 112 of 1998 and amendments to Title V of the Constitution by the Constitutional Law no. 3 of 18 October 2001. Since then, civil protection is a matter of concurrent legislation, meaning that, except for the fundamental principles, legislative power lies with the regional governments.

The Civil Protection Department, which organizationally is part of the Presidency of the Council of Ministers, directs the activities of the components and operational structures of the National Civil Protection Service; in the event of the declaration of a state of emergency, coordinates these in agreement with the regional governments.

This Institution does not confine itself to intervening with rescue operations in disaster and natural calamity situations; rather, the greater part of its activity focuses on prediction and prevention. Law 225/92 expressly provides for a complex and articulated structure of the Civil Protection's powers, not only in simple post-disaster management but in a set of integrated activities covering all stages of the "before and after ", according to the four pillars of Prevision - Prevention - Rescue - Reconstruction.

The studies, research, training of those engaged in the system (professionals and volunteers), the activity of providing information to the public, emergency response planning and exercise activities constitute a significant part of the work of Civil Protection. Traditionally, the core of Civil Protection is "emergency management", namely what are known as the care and rescue duties towards those hit by disasters.

In most European countries, the task of civil protection is assigned to a single institution or to a small number of public bodies. In Italy, however, this function involves the State organization as a whole, both central and peripheral bodies along with the entire system of local authorities; civil society also participates fully in the National Civil Protection Service, through volunteer organizations.

This ensures a level of central coordination coupled with high operational flexibility throughout the country, as well as explicitly involving local authorities which already run the territory "in time of peace".

The strong emphasis on the work of volunteers (who are trained, qualified and part of an organizational structure) also allows to channel into civil protection, when the need arises, a great number of professional and human resources drawn from civil society.

Qualitatively speaking, the past years have witnessed an increasing growth and standardization of instructional levels and types of equipment supplied to the working groups of volunteers; in quantitative terms, an estimated 300,000 volunteers operate in Civil Protection in Italy, grouped and organized into about 2,500 groups spread throughout the country.

The organization as a whole is focused on principles of territorial decentralization and "systemic" functioning; these factors make for increased operational flexibility, fluidity of intervention, scalability and adaptability to different possible scenarios.

The coordination of all components of the Italian Civil Protection, structurally organized at various territorial and functional levels, is achieved through a method known as Augustus, which allows representatives of each operational function (health, volunteer work, telecommunications, etc.) directly to interact in various fields of decision and operations rooms, and at different levels, thus initiating collaborative decision-making processes in real time.

The Augustus Method (from the name of the Emperor Augustus, the first to set up consultation groups among his collaborators) has already proved its excellent functionality during the most recent disasters that have hit Italy. Augusto argued that: "The value of planning decreases with the increasing complexity of events." This is why the Augustus Method stands out for its simplicity and flexibility.

An important recognition of Italy's leadership in the field of civil protection was given by the OECD Global Forum Scientific, which in 2008 assigned Italy with the Secretariat and the seat of the GEM (Global Earthquake Model) Project, a Foundation whose goal is to provide a shared platform for the calculation and disclosure of seismic hazard and risk on a global scale. GEM's founding members, in addition to Italy, are Norway and Singapore and its participants include Australia and New Zealand, along with countries which are formalizing their accession procedure.

Italy contributes financially to this initiative through the Presidency of the Council of Ministers and avails itself of the colloaboration of the Pavia EUCENTRE (European Centre for Research and Training in Earthquake Engineering) and other major international centers, including the ROSE SCHOOL (Centre Post Graduate Training and Research for Earthquake Engineering and Engineering Seismology) and the soon to be established UME (Post Graduate School on Understanding and Managing Extremes).

While GEM, in collaboration with the Presidency of the Council of Ministers and the Italian Ministry of Foreign Affairs, is exploring the possibility of establishing an intergovernmental body, the idea has been put forth to expand the scope of this body to comprise all risks deriving from natural disasters; this as a result of the increasing international acknowledgement of the issue of natural hazards and of Italian excellence in this science.

It was therefore decided in the inter-ministerial consultation with the Presidency of the Council of Ministers to place alongside the GEM Foundation a new structure called GRMO, Global Risk Modeling Organization, an intergovernmental organization (IGO), headquartered in Italy, with a view to developing models based on uniform and independent standards for the assessment of the vulnerability and the probability of risk arising from natural disasters caused by man.

The participation of States in the GEM Foundation will thus move to GRMO, in order to widen its membership and target a great number of countries. The creation of an intergovernmental body should, in fact, encourage participation by the governments of other countries involved in the initiative and make it easier to share information which is often of a sensitive nature.

The Global Risk Modeling Organization (GRMO) is an intergovernmental organization dedicated to risk modeling on a global scale. GRMO aims to establish independent, uniform, worldwide standards for calculating and communicating data on vulnerability, hazards and risk deriving from the various types of natural and man-made disasters.

GRMO shall be the technical/scientific instrument to support decisions and actions to reduce losses from catastrophes, and shall integrate developments on the forefront of scientific research in several modules, such as hazard, vulnerability, exposure, socio-economic impact and risk; the GRMO platform will allow users to calculate the risk of different types of disasters on a global scale, based on the most reliable methods available, and communicate the different types of risk clearly, accurately, and transparently.

GRMO will develop state-of-the-art software and databases as a necessary basis for reliable mapping, monitoring and communication of different types of risk. GRMO will use its knowledge and network to define guidelines, model codes and technical reports. GRMO also proposes to empower groups of professionals and specialists in different areas of risk around the world and will supplement local capacity in a global context.

Also Bulgaria, in the light of the seismic factor, has a strong interest in the development of Civil Defense and has started a virtuous path in that direction. In this context it is worth remembering that September 15, 2010 in Sofia, the then Secretary to the Prime Minister and Head of the Italian Civil Protection, Mr. Guido Bertolaso, formed with the Interior Minister Tsvetanov a memorandum for cooperation between our two civil protection bodies which contains a number of concrete initiatives. Italy and Bulgaria are expected to continue to pay the utmost attention to the matter and hope for a rapid accession of Sofia to GMRO.