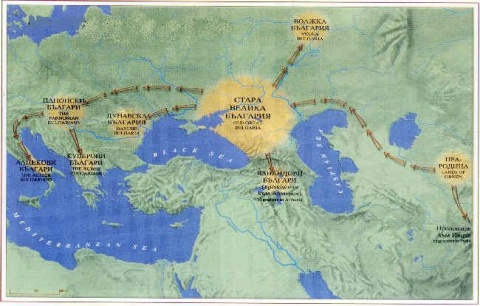 A map showing the settlements of Bulgars (Proto-Bulgarians) during the 5th-7th century AD.

Bulgarograsso, Bulgaro and Bulgarello, near Como; Bolgare, near Bergamo, Bulgaria (Cesena – Forl?); Bolgheri – near Livorno; Celle di Bulgheria (Salerno) or Monte Bulgheria (in the Cilento natural park (Salerno) and many others. How have these names come into being?

One of the major hypotheses, no doubt, points to the Bulgars, also known as proto-Bulgarians, and their arrival in Europe and in the lands of today’s Italy, where they settled leaving their legacy in the names of settlements, mountains, regions, etc.

Researchers believe that in 377 AD - 453 AD part of the proto-Bulgarian tribes settled in Central Europe and started to play a key role in the tribal union of the Huns. It is interesting to note that in the precious ancient manuscript entitled “Nominalia of the Bulgarian Khans”, their first ruler is named Avitohol, which according to a number of authors is most likely exactly the Hun chief Attila.

As part of the Huns’ tribal union these Bulgars took part in numerous military incursions in Byzantium as well as in the territories of today’s Germany, France, and Italy. The proto-Bulgarian armed forces were renowned for their military skill and high combat spirit, their major weapon being the maneuverable and swift-moving cavalry, which enabled them to carry out blitz and hit-and-run strikes.

The Hun tribal union started its attacks against Italy around 401 AD led by Alaric I, and became especially intensive during the rule of Attila. However, Attila died in 453 AD and his vast empire quickly began to dissolve. It is precisely during the time of the Hun period that the first settlement of proto-Bulgarians in Northern Italy is dated to. Back then the Bulgars went to Friuli but were repulsed and most of them returned to the lands along the lower Danube.

After the breakup of the Huns’ tribal union, some of the proto-Bulgarians remained in Pannonia, today’s Western Huntary, from where, according to some authors, they started to undertake joint incursions of Italy together with the Langobards and the Gepids in the middle of the 6th century. In one of these invasions they entered Italy and settled in the valleys of the rivers Isonzo and Tagliamento. Again, in the middle of 6th century, the proto-Bulgarians in Pannonia were included in the Avar Khaganate.

In the 6th century, the Bulgars also reached Italy within the ranks of the Byzantine troops who landed in Sicily but there is more interesting information, even though some of it is controversial, about the arrival of groups of proto-Bulgarians in Italy in the middle of the 7th century, connected with the names of Alcek and Altsiok. According to some sources, the person in question is the fifth son of the ruler of the so called Old Great Bulgaria Khan Kubrat – Alcek; according to others, this is the leader of the Bulgars within the Avar Khaganate named Altsiok.

Frankish historian Fredegarius, for example, narrates about an intestine war for power between a Bulgar and an Avar bidder for the throne, which broke out in 631 AD and ended with a defeat for the Bulgars.

Some of them left Pannonia, and led by Altsiok, set out for the lands of the Frankish king Dagobert I in today’s Bavaria. At first, the Franks welcomed them by granting them refuge in their settlements. However, one night the king ordered his inferiors to slaughter the new settlers, and in the ensuing carnage only 700 out of 9 000 proto-Bulgarians survived. Later they got permission from the Langobardian king Grimoald to settle in the Ravenna Exarchate.

According to Byzantine chronicler Theophanes the Confessor, shortly before his death, the ruler of Old Great Bulgaria Khan Kubrat left his five sons with the legacies not to separate, and to protect the unity of their union. However, they failed to observe his will, and Old Great Bulgaria collapsed under the attacks of the Khazars. It is believed that some of the proto-Bulgaria’s led by Kubrat’s youngest son Alcek settled in the lands of the Langobard kingdom.

Some of the contradictory information about how this settlement occurred is provided by the Langobardian historian and monk, who lived in the 8th century, Paul Warnerfred, also know as Paul the Deacon (Paulus Diaconus in Latin) in the Fifth Book of his „Historia Langobardorum”, that, unknown why, around 667 AD, the Khan of the Bulgarians Alcek left his fatherland, entered Italy peaceful and with all his men presented himself at the disposal of King Grimoald (662 - 671 ca.), rendering him his service, and asking to remain on his territory.

The latter sent him to the Duchy of Benevento in the regions of Molise and Campania northeast of Naples to his son Romuald, to whom he ordered to provide Alcek with space where the latter could live with his people. Romuald gave Alcek a warm welcome, and offered him spacious lands, which had been unpopulated, such as Gallo Matese, Sepino, Bojano, Isernia and “other towns with their lands.”

The proto-Bulgarians of Khan Alcek received the opportunity to work these lands, which had been left without population as a result of large leprosy epidemics in this part of Italy. According to Italian researcher, Dr. Vincenzo D’Amico, Alcek settled his capital in the small town Cantalupo di Bojano (Cantalupo nel Sannio). D’Amico even claims that the name Cantalupo originates from the proto-Bulgarian words “kan-teleped”, i.e. residence of the Khan.

Gradually, as Dr. D’Amico alleges, the Bulgarian colonization spreads from Benevento all throughout Southern Italy. At a later stage, the Bulgars also settled further to the South in the area of the Mingardo river, around the rocky ridge, which is still called Monte Bulgheria, and one of the towns in its foot is called Celle di Bulgheria, in the region of Campania.

According to many historians, Alcek and Atsiok are one and the same historical personality, the youngest son of Khan Kubrat. However, while this allegation is based on researchers’ conclusions, there seem to be no direct evidence for it. In any case, Bulgarians settled in Italy during different periods of the Middle Ages, remaining there forever, with Italy becoming their fatherland. At first they lived in dense spots but subsequently spread out across all of Italy.

In spite of some imprecision caused by the outdated ideas about the origin of the Bulgarians at the time, in his studies about the Bulgarians in the Middle Ages[1], Dr. Vincenzo D’Amico claims that there are hundreds of names of settlements in Italy that have proto-Bulgarian origin.

In 1960 in his brochure on the Bulgars who settled in Italy[2], Dr. Ivan Bankovski, citing Dr. D’Amico’s research, writes that among the old Bulgarian toponyms of geographic spots in Italy, the ones with a root of “bolg” or “bulg” must be noted first. Here are a few of the ones that he mentions: Bolgare (near Bergamo), Bolgiano (near Milano), Bulgarograsso, Bulciago, Bulgaro, Bulciaghetto and Bulgarello (near Como), Bolgher (Trento), Bulgaria (Cesena - Forli), the Monte Bulgheria mountain and the Celle di Bulgheria municipality – in Southern Italy, etc.

Roots such as "bolg" and "bulg" exist to this day in many Italian family names such as: Bulgari, Bulgarelli, Bulgarini, Bulgherini, Bulgaroni, Bulgaro, Bolgheri, Bolgarini, Bolgaroni, Bugarini. According to the researchers, those who bear them are distant descendants of the proto-Bulgarians. In addition to the roots “bulg” and “bolg”, according to the same authors, there are two more roots of proto-Bulgarian origin in Italy.

One of them is “cara”, which means something black such as “carbone” (coal), and the second one is “can”, such as the already mentioned name of Cantalupo di Bojano. The root “cara” is contained in the name of the following placet: Carasco (province of Genova), Caramagna, Carasone and Caraglio (Cuneo province), Caragna (Calizzano, Savona province), Caranza (Liguria), Carate (Milano), Caranero (Como), Carata (Novara), Caravate (Varese), Caravonica (Imperia), among others.