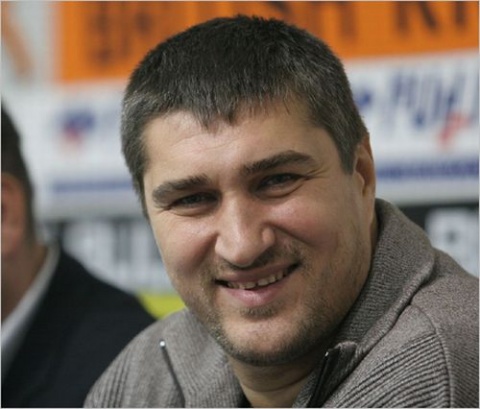 Interview with legendary Bulgarian volleyball player Lyubo Ganev for the "Bulgaria-Italy Survey" of Novinite.com (Sofia News Agency). Ganev is the President of Casa Sicilia, the official representation of Sicily in Bulgaria.

How can a person become a legend in a certain sport - in your case in volleyball - in two different countries, i.e. in both Italy, and Bulgaria?

First of all, one needs to get the proper opportunities to develop in that respective sport.

I had these opportunities in Bulgaria – starting with the sports high school in Ruse, then the school of CSKA, and then the chance to play for the Bulgarian national volleyball team.

After that came the great opportunity for me – when I had accomplished all that I mentioned,  I got the chance to be noticed by foreign scouts and to be bought by a foreign team. This is what happened in my case.

When I went to play in Italy, it had the strongest volleyball championship. But I did manage to go play in Italy thanks to the opportunities to train and develop that I had in Bulgaria.

Only after that I managed to prove what I am capable of in Italy. So, most of all, what is needed is to have the proper conditions to develop.

What are the attitudes towards sports in Italy, and how can Bulgaria learn from Italy's experience, traditions, and schools?

I think that we have a lot to learn because in Italy everything is highly organized. Sports are professionalized, and those who deal with sports in Italy do only that. They get paid only to train and to play. And, of course, they have really good sports facilities.

But probably the most important thing lacking in Bulgaria is the so called law for sports. Italy has a Sports Act which stipulates that all firms investing in sports and art have their investments subtracted from their taxes. Basically, they are getting a lot of tax cuts.

This doesn't exist in Bulgaria, and that is probably why sports in Bulgaria cannot develop in all of their variety. We know that a lot of money is poured into football but we all know that football is politics. What is more, an average stadium can fit 50 000-60 000 spectators, whereas even the biggest volleyball hall has a lot fewer.

But sports in Italy are at such a high level largely thanks to the fact that they have a special law which allows a lot of money to be invested in sports.

According to your observations – what is the level of the sports cooperation between Italy and Bulgaria? What should be stressed to achieve better effects?

We do have a lot of projects going on in that field. Basically, all major sports federations are organizing bilateral meetings, trainings, and games. Our volleyball teams, for example, have friendlies with Italian teams almost every year. The most important thing is to identify a nation's strengths and to seek equally strong partners.

A large number of Bulgarian volleyball players – such as yourself – have played or are playing in Italy, and are doing really well. What is the explanation for that? What are the major similarities and differences between the volleyball styles and schools in Bulgaria and in Italy?

For the past 20 years Italy has had the strongest volleyball championship in the world. Maybe in the past few years, the Russians have started to catch up but the Italian volleyball championship is still the best. It still receives the most attention, the greatest amount of time on TV, it has the most attractive matches, and because of all of that all players dream of playing in Italy.

Of course, when we have a lot of Bulgarian volleyball players in Italy, this means that we have a very strong Bulgarian national team.

The similarities between the volleyball traditions in Bulgaria and Italy are that both countries have a lot of children's and teenage schools.

The difference is that the Italian schools provide better conditions for training. In Bulgaria, there is a lot of desire but the material facilities are not always there.

For example, in the winter a sports hall might not be heated, or the team would not have funding to travel around the country to play against other teams.

This is the main difference – there is a lot of desire among the youth in both countries but in Italy this desire is met with better conditions.

At the end of the day, when is Bulgaria going to defeat Italy unconditionally in volleyball? Is that going to happen sooner in volleyball than in football?

In the recent years, we, our national volleyball team, have been beating the Italians wherever we see them.

So we are already beating the Italians in volleyball. We still have a lot to ask from our football players before we can beat Italy – even though we do have many good and high-class footballers. I have always said that our problem in football is that we fail to play as a well-oiled team.

You recently staged a charity volleyball match in Italy – the Lyubo Ganev show – which brought together thousands of fans, and this happened years after you retired. What is your most memorable Italian experience? What is the major thing you associate with Italy?

I went to Italy to find out if I am a really good volleyball player, and if I can play at another level. Because being the best in Bulgaria is one thing, but being in the best championship in the world is different.

For me, Italy will remain the country where I had the change to prove to myself that I am a really good player, and to achieve a lot.

Italy remains the country which I will always be pleased to work for. Right now I represent over 20 Italian firms for the entire Balkan Peninsula, and I am also the chairman of Casa Sicilia. For me, Italy will always be a second Bulgaria.