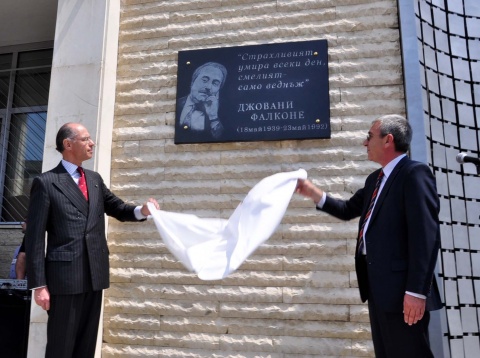 Inauguration of the plaque of Giovanni Falcone on the building of Blagoevgrad District Court, May 20th 2011. Photo by Emil Mihaylov, correspondent of BTA

Article by Lieutenant Colonel of Carabinieri Lorenzo Lebini, Attach? at the Embassy of Italy in Sofia as Interpol Liaison Officer, for the "Bulgaria-Italy Survey" of Novinite.com (Sofia News Agency).

Giovanni Falcone, Prosecutor, as well as his colleague Paolo Borsellino and the General of the Carabinieri Carlo Dalla Chiesa, are the most famous victims of the fight of the Italian State against organized crime.

General Dalla Chiesa, after the hard fight against the terrorism of the "Red Brigades" in the years between 1972 and 1980, was sent by the Italian Government in Palermo, as Prefect, to coordinate the efforts of the Italian Institutions against the "Mafia", at that moment the most powerful criminal organization in Italy and, probably, in the world. In October 1982, after 100 days in Palermo, he was killed with his young pregnant wife.

Many "enemies" of the "Mafia" have been brutally eliminated but Giovanni Falcone decided to show to the criminals and to the Italian society the real face of the law and the power of the legality: being Sicilian, like Paolo Borsellino, he had a real idea of the risk he was facing in counteracting the "Mafia" power, deeply rooted in the Sicilian environment.

Giovanni Falcone started to fight the "Mafia", clearly having in mind that the ground in which the "Mafia" grows up is the lack of legality and culture. Unfortunately, not everybody, for different reasons, supported Falcone in his fight. The mission to overcome the "Mafia", as organized crime in general, is not an assignment for some clever Prosecutors or Policemen: all the components of the society must collaborate in this.

This is the real legacy of Giovanni Falcone, this is the message that was sent all around the world with his supreme sacrifice: for this reason, Falcone is a symbol of the fight not only against organized crime but also against all sorts of injustice, which is the ground where the organized crime flourishes.

Giovanni Falcone was killed, with the wife and his bodyguards, on 23 May 1992, in Capaci.

Paolo Borsellino, friend and colleague of Falcone, tried to continue his mission but, in July 1992, a few months after the homicide of Giovanni Falcone, he was killed too with the same awful system: a devastating explosion.

Organized crime in Bulgaria, like in others Countries, has a different origin, but the result is the same: the civilian society is affected by a terrible illness, the life of the people is conditioned, there is no hope for honest citizens and trust in the Institution crumbles, inhibiting the development of an open and free civilian society.

The "Falcone Award", established since 2009 on the initiative of the Regional Council for drugs of Blagoevgrad, with the collaboration of the Municipality of Blagoevgrad and with the approval of the Italian Embassy in Sofia, rewards the Bulgarian Magistrates and Policemen that have put their efforts in the fight against organized crime, following the noble example of Giovanni Falcone.

The creation of the "Falcone Award" is the demonstration that the sacrifice of Giovanni Falcone was not in vain because his message has an international value and his example is still a guide for everybody trusting freedom and democracy.

The prominence and the signification of the "Falcone Award" in Bulgaria is not only the understanding of the importance of the sacrifice of the people who have faced the organized crime but also the consciousness of the message of Giovanni Falcone and of the other martyrs in the fight for a civilian society freed by any kind of conditioning and violence.

The reputation, the consideration and the respect for Giovanni Falcone at the international level is clearly testified by the monument, dedicated to the heroic Prosecutor by the US Government, located in Quantico, Virginia, in the FBI training center.

On 20 May 2011, on the occasion of the delivery of the "Falcone Award 2011", a commemorative inscription will be inaugurated on the building hosting the District Tribunal of Blagoevgrad. The inscription in the plaque will be the following: "The one who is afraid dies every day, the brave dies only once". This phrase gives a synthetic and clear idea of the spirit of Giovanni Falcone and other heroic fighters against the "Mafia".

Bulgaria and Italia have many connections, from the times of the Roman Empire till our days: the "Falcone Award" is another one, testifying the common willingness of two modern European Countries to grow up and develop  in a safe, free and democratic social environment.

I would like to conclude my article with a phrase of the Ambassador of Italy in Bulgaria, H.E. Stefano Benazzo, pronounced on the occasion of the ceremony of the handing over of the first "Falcone Award" in Blagoevgrad, on 24 June 2009: "I hope that the Bulgarian magistrates, policemen and citizens can find, remembering Judge Falcone, the necessary fortitude to continue their mission".