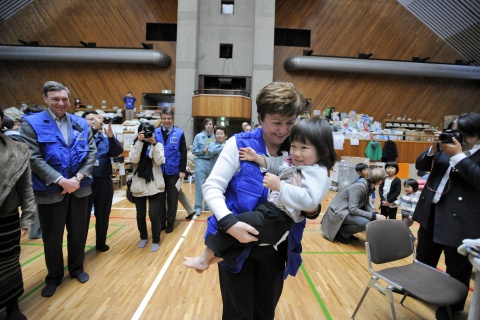 Cooperation and solidarity are at the heart of an effective and efficient response to natural disasters and humanitarian crises.

At the European level, cooperation in disaster preparedness and response are facilitated by the European Union's Civil Protection Mechanism. Members of the Mechanism are all 27 EU member states, plus Croatia, Iceland, Liechtenstein and Norway. It supports the mobilization of emergency assistance when major disasters strike inside and outside the EU.

Since its creation in 2001, the Mechanism has been activated 59 times for emergencies inside Europe and 84 times for emergencies in third countries. It has intervened to help in a variety of situations, including forest fires (Portugal, France), floods (Poland, Romania, Pakistan), earthquakes (Haiti), industrial accidents (Hungary, Gulf of Mexico/US), terrorist attacks (Mumbai/India), H1N1 crisis (Bulgaria, Ukraine), evacuation of EU citizens (Libya), and the recent earthquake/tsunami in Japan.

In the aftermath of numerous crises within and outside Europe, Italy has repeatedly stood out as a valuable partner and responsible friend, offering transport and in-kind assistance to affected countries which have requested aid through the EU Civil Protection Mechanism. For instance, Italy was one of the most active providers of assistance in Haiti after the earthquake that destroyed much of the country and killed close to 230,000 people in early 2010. Electricity generators, water purification equipment, medicines, blankets and other relief items were sent from Italy to earthquake-hit Haiti, and were effectively plugged in the overall European effort to assist the survivors.

Italy's assistance to the Balkan countries that suffered floods last summer is another recent example of Italian engagement in disaster response. Various items, urgently needed on the ground in the aftermath of the floods, (tents, emergency kits, beds) were sent on a short notice to the affected areas by the Italian authorities.

In the most recent crisis – that in Libya, Italy has also been on the frontline – not only of the risks, but also of the response. Through the EU Civil Protection Mechanism, it offered five flights taking out of Tunisia about 900 third country nationals who had fled violence in Libya. Together with the co-financing from the European Commission, Italy helped bring these people home.

Italy has also benefitted from European solidarity. Upon the country's request, the European Civil Protection Mechanism has pooled the resources of its other participating states and has provided prompt and effective assistance. For instance, we were there when Italy called for help to fight forest fires in Sardinia. In this case, the European reserve of fire-fighting aircraft has been used to help national forces tackle the fires.

The Mechanism was activated shortly after the earthquake in L'Aquila Province in April 2010, when Italy requested technical experts to help assess the stability of buildings damaged by the earthquake. A team of eight European experts on structural assessment was deployed to the area affected by the earthquake, where they helped the Italian civil protection authorities to avoid further damage and assess the risks.

But no matter how fast and well-coordinated our response is, it is only one step in the cycle of managing disasters. Another, equally important step is preparedness – because it is the only way to reduce our vulnerability to future natural or man-made crises. While prevention and preparedness remain the prerogative of national authorities, substantial value can be added by collaboration on the European level: with other governments, regional and local authorities, and the European institutions.

In prevention and preparedness, Italy has been an active partner in the European framework. The Italian Civil Protection Department contributes to the Training Programme of the European Civil Protection Mechanism, which ensures better compatibility between the civil protection teams of our members when they are deployed jointly in a disaster area.  Training together also invigorates the exchange of best practices, and thus enhances the skills of civil protection practitioners.

The growing frequency, intensity and complexity of disasters means we need to be prepared to deal with more, bigger and interlinked risks – and one of the best ways to prepare for those risks is through simulations and training in situations that are close to real life. In the past few years, the Italian Civil Protection Department has been particularly active in this regard: it has organized four full-scale exercises, simulating the situation and conditions of major emergencies which would require the activation of the European Civil Protection Mechanism, and the involvement of its participating states.

The latest exercise (TEREX 2010) took place in Tuscany in November 2010 and was a huge success. It simulated a large earthquake in northern Tuscany that, for the purposes of the exercise, triggered the request of assistance through the European Civil Protection Mechanism. This tested the Italian command and coordination structure and its cooperation with the Community Civil Protection Mechanism.

In addition, the simulation proved to be a valuable test for EU Civil Protection Mechanism procedures and a tool to improve the coordination of resources at the EU level. Together with the Italian civil protection system, the exercise was joined by Urban Search and Rescue teams from Austria, Croatia, France, Slovenia and the Russian Federation. So, it was a great example of working together, learning together preparing together, and learning together – for the risks that we face together.

And as these risks are growing, it is important to ensure that our management moves from a previously ad-hoc form of response that has substantial limitations, to greater planning and advance preparation that will ensure both efficiency and predictability. With this objective in mind, the European Union members have started to preposition complete modules that can be deployed on a short notice and that in the future will fit together like Lego-blocks in a common framework of response.

The Italian Civil Protection Department has joined this effort by setting up two modules for rapid reaction in disasters: an Advanced Medical Post with a Surgery, and a Medium Search and Rescue Module.  The Medium Search and Rescue module has a staff of 30, that includes a doctor and paramedics, management personnel, experts on logistics and telecommunications and two search dogs. They can be deployed whenever a disaster has rendered people missing and in need of location and emergency assistance.

Equally impressive is the Advance Medical Post – the second of the Italian modules. It consists of 18 people, including five doctors (an emergency specialist, a serious injuries specialist and three surgeons). The post operates in six tents, fully equipped for treatment and surgery on the ground of a disaster. Modules like this are particularly useful in large-scale disasters, where a high number of people are injured and require emergency aid. This was precisely the situation in Haiti, where the Italian Advance Medical Post was first deployed, and where it helped treat hundreds of injured people.

The value of Italy's contribution to European cooperation in disaster preparedness and response is beyond doubt – Italian doctors, engineers, experts in civil protection, and search and rescue have saved lives around the world and have mitigated the effect of disasters closer to home. Meanwhile, Italy has received proof that it can also count on its European partners when in need – most recently, this solidarity was manifested after the earthquake in L'Aquila in April 2010.

This reminds us that by pooling the resources of European Member States, it is possible to provide a common European response that is more effective than the one delivered by any country acting alone. Our plans for the future of disaster management are ambitious: we would like to invest more in prevention and preparedness, and to reinforce EU disaster response capacities inside and outside EU.

We at the European Commission will continue to count fully on the engagement of Italy in helping where help is needed the most. On this occasion I would like to express my gratitude to the Italian (civil protection) authorities for all the effort made so far in the field disaster management and for your support to the development of EU civil protection cooperation. I am looking forward to our cooperation in the years to come.