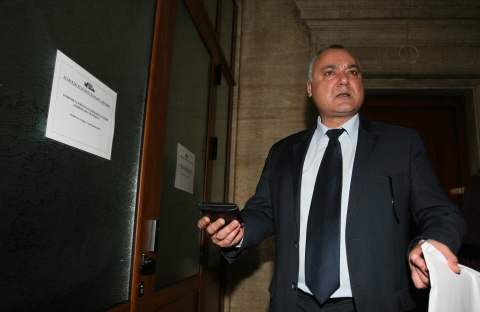 Former Ataka MP Valentin Nikolov has vowed to notify the Prosecutor`s Office of a fraud scheme involving promissory notes within the nationalist party. Photo by BGNES.

He threatened to refer the matter to the Prosecutor's Office.

Nikolov, who also chairs the Parliamentary Anti-Corruption, Conflict of Interests and Parliamentary Ethics Committee, left Ataka, together with Kiril Gumnerov and Ognyan Peychev.

Upon departing from Ataka, the three MPs denounced the spate of clashes staged by the far-right party, saying that the incident in front of the Banya Bashi mosque in Sofia on May 26 had been "the last straw".

In an interview for private TV channel bTV, Nikolov confirmed that the case with the notorious promissory notes involves a sum of about EUR 150 000 and a total of 15 acting MPs, together with a number of other people outside parliament.

He could not cite a concrete figure of the people drawn into the scheme, but suggested that almost all of the leaders of the party's election lists, including him, had been forced to sign such documents.

The former Ataka MP dismissed the conclusions of a check carried out by the Prosecutor's Office verifying that the documents had not been signed under duress. According to Nikolov, the prosecution authority has staged selective hearings and the judicial proceedings are seriously flawed.

Nikolov and other victims of the alleged fraud scheme fear they may have to return the money after it emerged that the documents signed by them carry a legal value, contrary to what they had been told.

"I cannot say if I owe this money. The scheme is very complicated, with five offshore companies involved. We have conducted an investigation of our own and have reached a certain stage. We hope that the Prosecutor's Office will do its job and summon for hearings everyone who signed these documents. The things happened very quickly- we were told one thing, then something else happened. I , personally, can say that I have been misled.", Nikolov stated.

He added that Ataka members had tried for 2 years to talk their leader Volen Siderov into fixing the documents, but their efforts had come to nothing.

Nikolov rejected claims that the three former Ataka MPs had departed because they had been "bought" by other political formation, advising Siderov to take a closer look and ask himself why so many people were leaving him, including ones from his closest circles, like Valentin Simeonov, his best man and owner of Burgas-based SKAT TV.

He confirmed rumors that more people were preparing to leave Ataka's lines after the elections but refused to say whether Slavi Binev was among the expected departures.