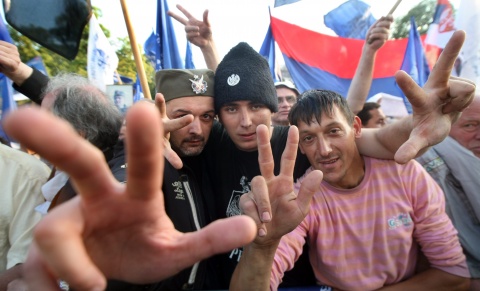 Supporters of genocide suspect Ratko Mladic wave Serbian flag during a rally organized by the ultra nationalist Serbian Radical Party in front of the Parliament building, in Belgrade, Serbia, on 29 May 2011.

Some ten thousand Serbian nationalists flocked in front of the parliament building in Belgrade to protest against the arrest and proposed extradition of former Bosnian Serb military commander Ratko Mladic.

Mladic is accused of several atrocities during the Bosnian war, including the Srebrenica massacre, in which 8,000 Muslim men and boys were rounded up and killed, and the 44-month siege of the city of Sarajevo, during which 10,000 were killed.

The protest rally was organized by the far-right Serbian Radical Party (SRS), whose leader Vojislav Seselj is in The Hague also facing war crimes charges.

The demonstration featured Mladic's wife Bosilka and son Darko at the tribune.

In the course of the protest, a letter by Voislav Sesel was read, saying that Serbian President Boris Tadic "will have to assume responsibility for the arrest and the planned extradition of Ratko Mladic". The crowd joined in, calling Tadic a "betrayer" for ordering the arrest of "the Serb hero" and urging him to "kill himself."

More than 3,000 riot police were deployed around government buildings and Western embassies to prevent the demonstration from turning violent.

Police officers tried to block small groups of extremists from reaching the rally.

Supporters of the extreme nationalist Radical Party were bused in to attend the rally. Right-wing extremists and hooligan groups also urged followers to appear in large numbers.

Sporadic clashes erupted at the rally, with several dozen protesters throwing stones at riot police wielding batons. The protesters carried flags of the far-right SRS party and posters, banners and t-shirts. They chanted songs and slogans in support of Mladic and Sesel. The rally ended with the arrest of several demonstrators.

Mladic's family and lawyers have been fighting his extradition, arguing that the former general is too ill to face charges. The family plans to appeal the extradition on Monday and to demand an independent medical checkup — moves described by the authorities as a delaying tactics.