Italy – Leader in Innovation and Creativity 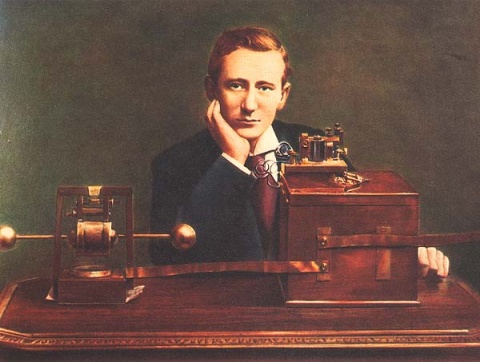 The wireless telegraph, 1863, was invented by Guglielmo Marconi. Image from electronicsandyou.com

An article by Elza Hadjiyska for the "International Survey: Bulgaria-Italy" of Novinite.com (Sofia News Agency).

A Travel through Time and the Major Italian Discoveries and Inventions that Changed the World.

Italy of beauty, unique design, rich cultural and historical heritage and the comprehensive genius of Leonardo is well-known. What may be less known is another typical Italian quality – inventiveness. Its roots lie in the ancient Roman Empire that gave the world the Roman law, the roads, the water-mains and much more.

An interesting fact is that the world 'speaks Italian' in music, banking, accounting and seafaring. Many of the significant technological breakthroughs and theories that changed the way of thinking and living are credited to the Italian inventors and scientists: Antonio Meucci's telephone; the wireless telegraph; the experimental helicopter designed by Enrico Forlanini; the first version of the gasoline engine; Volta's electrochemical pile and Marconi's radio, ranked by The Independent among the top 10 major discoveries in the world and many other.

Therefore, this short journey through time will start with astronomy – the first discovery of united Italy of 150 years ago, made on on April 26, 1861 with the telescope of the Observatory in the town of Brera by the famous astronomer and mathematician Giovanni Schiaparelli is the Esperia asteroid, called 'the star of Italy', which became the symbol of the Kingdom of 1890.

The binoculars tube, 1609, Galileo Galilei was the first to point his telescope to the night sky and made remarkable discoveries that changed the world forever. His first astronomical observations were published in March 1610 in the short treatise Sidereus Nuncius. In the same year he discovered also the satellites of Jupiter.

The first and biggest asteroid, January 1, 1801, Giuseppe Piazzi discovered the first asteroid that was initially considered a comet. He called it Ceres by the name of the Sicilian goddess of wheat.

The source of meteor storms and meteor showers ('shooting stars'), 1866 was first clarified by the Italian astronomer Giovanni Schiaparelli. In that year he found that the orbit of the August Perseids is too close to the orbit of the periodic comet 109/Swift-Tuttle (rediscovered in 1982), which has a period of circulation around the Sun of 120-130 years. Schiaparelli clarified the frequency of meteor showers and their relations with comets.

Anesthesia, 1200, the physician Ugo da Lucca discovered anesthesia and its administration by inhalation

The first ambulance (horse-driven), 1244, designed to transport patients from the city to the hospital, was built in the Association of Believers for Charity in Florence.

Spectacles, 1289 – Salvino Armato degli Armati invented the spectacles. People with far-sightedness were the first to benefit as the lenses he created were convex. Nearsighted people had to wait much longer, until 1450, when concave lenses were made in Germany.

The first thermometer, 1596, Galileo Galilei made its prototype called thermoscope. There was no scale for measuring temperature, it could only be determined if it was lower, higher or equal without any figures in degrees. In 1612 another Italian scientist, Santori Santorio developed a scale to placed on Galileo's thermoscope.

The first skin transplantation, 1597 was implemented by Gasparre Tagliacozzi in Bologna who grafted skin from the hand to the nose.

Aspirin, 1838, the basis for its invention, the salicylic acid we owe to Rafaele Piria.

Nitroglycerine, 1847, was invented by Ascanio Sobrero.

The first electric shock, 1938, was applied to a patient by Ugo Cerletti. Due to its efficacy the method became widespread for treatment of severe psychiatric disorders.

The Arabic numbers in Europe, 1202 and the golden ratio derived from the Fibonacci sequence were introduced by Leonardo Fibonacci, considered as 'the most talanted mathematician of the Middle Ages'. Today he is best known for the numerical sequence, named in his honor – the Fibonacci sequence: 0, 1, 1, 2, 3, 5, 8, 13, 21, 34, 55, 89 ..., where the first two Fibonacci numbers are 0 and 1, and each subsequent number is the sum of the previous two. It often appears in fine arts, music, and architecture and in nature. Fibonacci sequence is considered an element of harmony in the universe and some even call the derived thereof 'golden ratio' the number of God.

The algorithm for solving algebraic equations of third degree III, 1543 was discovered by Ludovico Ferrari.

Font 'italic', 1501 was created by Aldo Manuzio, publisher and typographer and by Francesco Griffo.

The alphabetical dictionary, 1502 was compiled for the first time by Ambrogio Calepino from Bergamo. Today still the word 'calepino' is used with the connotation of printed publication containing information structured in alphabetical order.

The newspaper, 1563 was published for the first time in Venice and was sold at a price of one gazzetta (Venetian coin from the time of Serenissima Republic), hence the origin of the name of the printed media (newspaper in Italian is gazzetta).

The typewriter, 1808, was invented again by Pellegrino Turri.

The bill of exchange, 1400 was applied for the first time by Francesco Marco Datini.

The first bank, 1406, in Genoa. The Bank of San Giorgio was the first bank in the modern sense, dealing for the first time with issues of public debt and was described by Machiavelli as a 'state within a state' - a real public institution.

Life insurance, 1653 was founded by Lorenzo Tonti. The so-called 'tontine' were financial schemes that facilitate the raising of loans.

An interesting fact is that Luca Pacioli was a mathematician and monastic, worked together with Leonardo da Vinci and it is not by chance that he is known as the 'father of accounting'. Even today in accounting and accounting services are used terms from his book, namely debit, credit, balance, asset, trial balance, capital, etc.

The linear perspective, about 1400 was invented by the Italian architect Filippo Brunelleschi in collaboration with Leon Battista Alberti.

The clockwork with spring dates from 1410 and was manufactured by Filippo Brunelleschi.

Camera obscura (Latin for 'dark chamber'), a main component of the camera, 1450, was invented by Leon Battista Alberti.

The universal joint, 1545, was 'reinvented' and given to the world by Girolamo Cardano.

The steam turbine prototype was designed in 1629 by Giovanni Branca.

The barometer, 1643, was invented by Toricelli.

The first mileage meter, 1678, was designed by Alessandro Capra for carts driven by draught animals.

The pistol, 1777, was invented by Alessandro Volta

The electrochemical battery, 1799, was also invented by Alessandro Volta.

The first electrical clock, 1831, was manufactured by Giuseppe Zamboni.

The drum magazine pistol, 1833, was invented by Francesco Antonio Broccu from Gadoni. However, in 1835 it was patented by Henry Colt.

The pneumatic motor, 1849, was designed by Innocenzo Manzetti.

The internal combustion engine, 1854, was designed and patented by Eugenio Barsanti and Felice Matteucci. It was initially used for driving metal processing machines.

The first seismograph, 1857, was developed by Luigi Palmieri.

The dynamo, 1858, was invented by Antonio Pacinotti.

The time zones, 1858, - Quirico Filopanti first launched the idea of the time zones (he called them days in length) in his work "Miranda", where he proposed to divide the surface of the globe into 24 zones, each of which was limited to two meridians in 15 degrees. But since could not find sponsors, his idea remained unrealized, and only later the Canadian engineer Sanford Fleming, applied it in practice.

The submarine, 1860, Giovanni Battista Luppis designed the prototype of steered from the shore submarine, which he called 'coastal rescuer'.

The wireless telegraph, 1863, was invented by Guglielmo Marconi.

The first telephone, 1871, was invented by Antonio Meucci.

The first carburetor, 1876, was invented by Luigi De Cristofori and later patented by Americans.

Electric bulb with carbon filament (incandescent bulb), 1881, was invented by Alessandro Cruto. His invention was presented six months later than Edison's but unlike Edison's bulb, which had a lifetime of 40 hours, cruto's invention guaranteed 500 hours operation

The electrical cable, 1884, was an idea of Giuseppe Pirelli.

The electrical motor, 1885, was developed by Galileo Ferraris.

The radio, 1895, was invented by Guglielmo Marconi. In 1896 he got the first patent for this invention in England. Shortly after, Marconi founded a company and the first 'marconigrams' were sent in 1898.

The Mercalli scale, 1897, which measures earthquakes' intensity and is called by the name of its inventor, Giuseppe Mercalli.

The first radar, 1922, Guglielmo Marconi initially developed it as radio telemeter – an instrument that captures moving objects in its field.

The first prototype of the modern helicopter, 1930, was developed by Corradino D'Ascanio. D'AT3 helicopter flew to a record height of 17.4 m, for 8 minutes and 45 seconds at a distance 1078 m.

The slow neutrons and nuclear reactions brought about by slow neutrons (essential for the development of the nuclear battery and the atomic bomb), 1938. For these inventions he received the Nobel Prize in physics.

Polypropylene (plastic), 1954. For this invention Giulio Natta received the Nobel Prize in chemistry in 1963.

The first personal computer (Program 101 or Perottina), 1962, was developed by Pier Giorgio Perotto.

The String Theory, 1968 – Gabriele Veneziano is considered its founder.

The first microchip, 1971, was developed by Federico Faggin.

The MPEG and МР3 standards, 1988 – a revolutionary invention in the area of the Internet, enabling online transmission of video and music. The foundations were laid by Leonardo Chiariglione, recognized by Times weekly as as one of the 25 most significant personalities in the world of Internet.

The first fireplace, in 1347 was mentioned for the first time in a document from Venice.

The ice-cream, 1559, its inventor is considered to be Bernardo Buontalenti, painter, sculpturer and architect, who produced it in the form we know today, for the opening banquet of the Belvedere castle. Later he designed a machine with rotating blades for ice-cream mixture production.

The lottery, 1576, was born in Genoa based on the idea of Benedetto Gentile.

The first piano, 1698, was made by Bratolomeo Cristofori as a keyboard instrument with hammers called 'heavy harpsichord, playing quietly and loudly'. This was a revolutionary solution in music because for the first time the loudness of the tone depended on the strength of the stroke.

Piano from 1722 of Cristofori. Museum of History, Rome

The crossword, 1890, was invented for the first time by Giuseppe Airoldi from Lecco who used an alias Inno Minato.

The first coffeemaker (espresso machine), 1901, with its invention Giuseppe Bezzera gave us the espresso coffee, a beverage we cannot make without.

The first highway, 1925, was built to connect Milan with the northern lakes and was named Milano Laghi or Highway to the Lakes.

On September 21, 1924 was opened the first section Milan - Varese of the highway (nowadays highway A8)

The spirit of invention and innovation continues to find expression. Significantly, in Italy operates an Agency for dissemination of innovative technologies with the objective to facilitate the match between smart ideas in need of funding and those who are ready to fund smart ideas.

Today, environmental protection and utilization of renewable energy sources (RES) acquire special importance. In this respect, here are some facts about Italy:

Italy is ranking first in the lowest CO2 emissions among car manufacturers on the European market for Fiat with 131 grams per kilometer.

Italy is ranking first in Europe in the use of clean geothermal energy and in technological production in this field.

We expect new challenges, because the human genius knows no limits. And the world can always be a better place ...