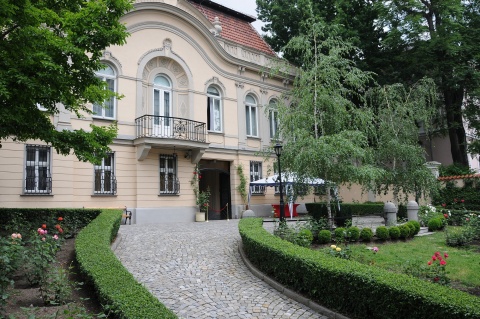 The most beautiful Residence in Sofia, this is usually the comment of those who visit the Bulgarian capital. Most of them admire its importance, elegance and refinement, but few people know its history.

The State-owned building is situated in the heart of the capital, close to the main square with the St. Alexander Nevsky cathedral and other ancient monuments of the city. The area is famous for its yellow road paving. The Parliament building and other important buildings of historical architectonical value are also located there.

The Residence and the Chancery of the Italian Embassy in Sofia are placed in a big complex, which graces the Bulgarian capital since the country was liberated from the Ottoman Empire in 1878.

On March 22nd, 1882 the Council of Ministers of the young Principality of Bulgaria granted to the Austro-Hungarian Empire an area for the construction of the premises of their diplomatic mission.

In winter 1883 the new building in boulevard Tsar Osvoboditel, whose project had been commissioned to architect Peter Paul Brang by the then Head of Mission, Baron Von Biegeleben, was officially opened.

In fact, the genesis of this building has been particularly complicated because of some reluctance from Vienna. When Baron Von Biegeleben was appointed to represent the Empire in Sofia, he was looking for an appropriate building with no result.

In face of the constant shyness of the Vienna capital to spend for a new building, the Baron, taking advantage of his personal friendship with the new Sovereign, the Prince of Battemberg, made the decision to build the complex at his own expenses. Once the complex was built, the Baron leased it to the Austro Hungarian Government. Another particularity of the Residence is that the Government of Vienna, for the first time, rented its Legation from  one of its Envoys!

In the following years the area, which after long negotiations with the Baron had became property of the Government of the Austro Hungarian Empire, was further expanded. In 1908 it looked like it is now, delimited by Shipka and Paris streets, boulevard Tzar Osvoboditel and boarding with the area in that period belonging to the Legation of Italian Kingdom (the Austrian Embassy nowadays).

In 1908, Architect Ludwig Richter planned the reconstruction of the building, which assumed the present aspect, and of the new north fa?ade on Shipka street 2 (the entrance of the Chancery of the Italian Embassy nowadays).

The outcomes from the First World War provided the basis for the final transfer of ownership to the Italian Government. On November 14th, 1918 a part of the building of the Austro-Hungarian Legation (which had been already closed by the Viennese Authorities after the collapse of the Habsburg Empire) was occupied by General Mabelli, head of the Italian Military Mission under the joint Anglo-French command, and by Minister Plenipotentiary Baron Aliotti, who was Commissioner of the Kingdom of Italy.

Extensive negotiations took place between the two countries until February 14th, 1925, when the parties eventually agreed upon a swap of the two buildings. Thus, Italy came into possession of the present compound with its garden, whereas the Austrian Embassy took the former premises of the Italian Legation, a Neo Renaissance Venetian-style building, erected between 1905 and 1910 on a project of architect Enrico Bovio.

From September 1944 to May 1947, the building was headquarters of the Soviet Kommandantura and space underground is said to have been turned into a jail. Later the building was returned to Italy to resume its original function. In that period there was still a door in the wall, that connected the two Embassies of Italy and Austria, familiarly called "the little Brenner".

Apart from its external beauty, the Residence of the Italian Embassy is characterized by the taste, elegance and the preciousness of the interior. The building was furnished, after the transfer of the property to Italy, and its most precious furniture come from the "Palazzina di Caccia di Stupinigi" in Torino.

The Italian Residence in Sofia has been spectator and protagonist of some important pages, sometimes sad, sometimes bright, of the history of the country, also because of the special bond that from October 1930, with the marriage of King Boris and Princess Maria Giovanna of Savoy, was created between Italy and Bulgaria. The transition of the building from Austria to Italy also coincides with the "belle ?poque" of Bulgaria.

In the second half of the twenties, Sofia became one of the favorite destinations for Italians who opened schools and institutes. In the city there were a famous Italian Club, a place for cultural and world meetings, a Classic college, a Scientific Institute, the "pro Oriente" Opera, and many Italian restaurants. Moreover, in June 1929 a squadron of 35 planes under the command of Air Marshall Italo Balbo flew over Bulgaria on a spectacular air show towards Varna.

Beside beautiful pages, there were less bright ones. It is worth to remind an episode which proves the intensity of the human relations established in Sofia and represented by the courage of the Minister Francesco Giorgio Mameli, Head of Mission from June 1943.

This episode is linked to one of the most dramatic pages of the Italian history. After the armistice of September 8th 1943, when Italy left the alliance with the Germans, the staff of the Italian Legation, despite the fact that Bulgaria was occupied by the Nazis, decided to remain faithful to the Italian Government. After having resisted for more than two months to threats and violence without complying officially, in November, after having destroyed all files and ciphers, the Legation left the headquarters.

The staff remained in Sofia also during the bombings. On January 10, 1944, Minister Mameli's house was air bombed, which caused 3 victims and 4 injured among the staff, while the Head of Mission and his family survived.

The mission staff was then interned outside Sofia, in Varchets in the heart of the chain of the Balkans. There were about eighty people, which included many women and children. Under surveillance of the Second Office of the Bulgarian State (counterintelligence), their fate was hard.

Several times the Minister, his family and his closest collaborators were threatened. Finally, with the coup in Bulgaria on September 9th, 1944, the internment ended. Nevertheless, during this hot period, the activities of the Legation did not stop.

The Head of Mission and his staff did not betray the strong believe that they represented Italy and acted accordingly, remaining in contact with a company of Grenadiers of Sardinia under the command of Captain Baso, which had arrived in Sofia for the funeral of King Boris. The Mission did not break off relations with the neutral foreign Legations and Bulgarian friends, organized the escape from German concentration camps of many Italian soldiers and procured them a refuge, always managing to explain to the Italian Government the political and military situation in Bulgaria.

When Soviet Union recognized the Italian Government, Minister Mameli decided to establish relations with the Soviet Embassy in Sofia. To reach a heavily guarded Embassy in the center of the capital, for a group of people interned at one hundred and fifty miles away, might have seemed a crazy plan. However, the endeavor succeeded and contacts continued. This fact had an enormous influence when the Red Army occupied Bulgaria and decided to protect the staff of the Italian Legation, considered prisoners of war, and to spare Italian goods.

After September 9th, 1944, the Legation restarted its functions although in desperate conditions. Sofia was in chaos, and  the Legation was uninhabitable. Minister Mameli found himself without official recognition. However, he proclaimed his right to protect Italian interests, and saved his compatriots and Italian assets from immediate danger. Normal Italo-Bulgarian relations were re-established on January 1st, 1945.

Minister Mameli was confirmed Minister of Italy in the same country where he had been interned. That winter thousands of former prisoners of war from every part of the Balkans and the Soviet Union were repatriated to Italy throughout Sofia.

Since than the Residence has been and continues to be, as well as a witness, also part of the dynamic development of relations between Italy and Bulgaria.