Simeon Saxe-Coburg: Italy Has Had Crucial Role in Bulgaria-EU Relations 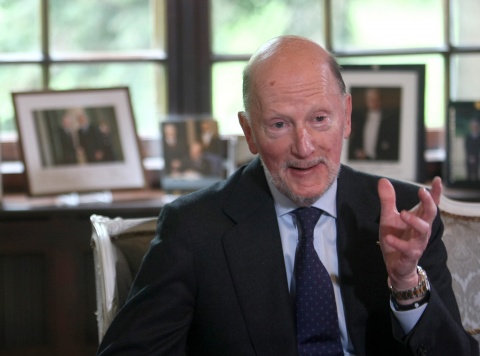 Your mother, Queen Giovanna of Bulgaria, was an Italian princess. What are your feelings and attachment for Italy?

My attachment to Italy is obviously sentimental and very personal for a number of good reasons. Such as the one you mention – of my mother being Italian – but also because I have a lot of friends in Italy and have visited Italy on many numerous occasions.

And also because for several years I had to look after my mother's and sister's interests in Rome regarding the inheritance of my grandfather, King Victor Emanuel. Plus, there is the endless cultural admiration I have always had for Italy.

Queen Giovanna was really beloved in Bulgaria. What kind of person was she? Where would you say that her heart lied, i.e. how would you describe her attachment to both Bulgaria and to her native Italy?

Indeed, my mother was beloved here in Bulgaria, and I am glad to say that even to this day people revere her memory.

As a son, it is very difficult to judge one's mother, but I would say that she was tremendously kind, always understanding, with a spirit of charity, solidarity, and helping people to the maximum.

She would always want to assist and help the ones in need so much so that my sister and I would joke that she had holes in her hands for giving away so much money. At the same time, I must say that my mother was very, very strict with us, with an extremely strong character concealed, if I can say, behind a very jolly and smiling personality.

Her attachment to Bulgaria was unconditional. Everything Bulgarian was placed by her on an altar, and, yet, she loved her native Italy, and whenever she would return either to Piedmont, from where the Italian royal family originates, or when she would return to Rome, it would be almost a feast for her.

Historically speaking, as you say, there have always been good relations between the Bulgarian and the Italian royal family for the simple fact that the members of royal families would meet all over Europe much before my parents' wedding.

But certainly after that the tie between them became very direct, and my grandparents from Italy were very, very found of my father, and obviously King Ferdinand was very close with his Italian relatives, too.

This relation has stayed to this day because people in Bulgaria inevitably associate me with Italy, and my Italian background, and in Italy people also look at me as half Italian, and hence there is this wonderful symbiosis of my being of dual origins.

I would say that also in a general way, the good feelings that were started in 1930 with my parents' marriage have kept on, which I think is very positive.

Bulgaria and Italy went for republican forms of government at roughly the same time, though in different situations and because of different factors. In this regard, have you felt a common fate in the two royal families? How have they responded to this abrupt change after serving the respective nations?

Indeed, Bulgaria and Italy became republics, but as you rightly say – for very different reasons and factors.

We must not forget that Bulgaria was invaded by foreign troops, and a referendum imposed under foreign troops is not really valid but this is another issue.

However, both countries are now republics, and in the days of those changes, we lived in exile in Egypt with my grandparents.

Naturally, there were similarities of being in exile, of being from two ruling houses which find themselves away from their original country.

But I must say from what I could see as a child from my Italian grandparents but also from my mother – feelings are one thing but the capacity of members of royal families to put up with adverse circumstances is something which has always amazed me because in many other cases people become bitter or aggressive but in the case of royal families there is this inbred sense of accepting situations with dignity, and of making up for whatever destiny has prepared for them.

How would you describe your grandfather Victor Emanuel III, the King of Italy? What kind of person was he? You spent some time with him in exile in Egypt – how did that experience change him after he served as the monarch of Italy for 46 years?

This is difficult for me to say. I only saw him on a few occasions since we arrived in Egypt in September 1946 and he died in December 1947.

My first memory of King Victor Emanuel was that he collected me at the harbor of Alexandria when we arrived from Bulgaria, and I had to ride with him alone in one car, and I was very impressed and shy.

But after that he congratulated my mother that I had such a good Italian, which my mother never thought that I had learned just from hearing her speak sometimes; but finding myself in the same car with my grandfather, I did what I could to produce my best in Italian.

Then, he would invite us occasionally for lunch, or I would go fishing with him and my grandfather but obviously I can't say anything personal about him. My impression was that he was much stricter, or that he kept things to himself much more than my grandmother Elena who was a very, very kind and open person. I would say there was her Slav side in that.

But from what I have heard and read about my grandfather, he was a very strict and disciplined person who for his 46 years of rule had to face many extremely difficult situations and I think time will put him in the right picture because there is always this, I would say, mean legend about him fleeing to Pescara but if we put things in the real historic pragmatic context I think his move saved a lot of lives in Italy and also made things easier for the transition.

You are probably the most prominent example of a former monarch who become involved in his country's politics in a ground-breaking way. From that point of view, how do you see the current role of the royal families in countries such as Bulgaria and Italy? Do you believe these royal families still have a responsibility for their nations?

Thank you for qualifying it as a prominent example. Maybe I would say that it is a unique case in history for a king to become prime minister of the republic of his own country.

But this was just a part of the circumstances and it was a way for me to see that after 50 years of exile, and after having followed Bulgaria very closely through all those years I could eventually, in democratic circumstances, assist, help and serve my country in its evolution towards Europe.

Things don't come by themselves. They always depend on different circumstances, and obviously also on a team of people so I do not want to sound like someone who tries to glorify himself with the effort of four extremely difficult years. And, again, the future will tell whether I was wrong, or whether we did the best we could in those different circumstances.

As to the role of royal families in our two countries – Italy and Bulgaria – this depends on the persons and individuals so one cannot give recipes. I always think that to bear the name of Bulgaria – my name is Simeon of Bulgaria – is something which has to be kept on a piedestal – and always keep in mind that one stands for something, that one is part of the history of one's country. So the normal behavior should be according to this.

But that is a rule that I believe for any royal family. And I think that the responsibilities to our respective nations are something pleasant, permanent, something you cannot change whether you are in your function or not, whether you are in your country or not. It is a matter of simply feeling one always has to stand for one's country, and to try to show it in the best light possible.

Being the successor to the Bulgarian throne and the grandson of the Italian king, how do you view the relations between Bulgaria and Italy today, both on a bilateral basis and within the EU?

This is not easy to answer for it could be a very lengthy reply but, generally speaking, I do believe that our bilateral relations are good economically but there is more to be done for Italian investments which are present in Bulgaria, and which I personally did my best to increase.

But I would like to underline that these investments have also come here thanks to the prominent ambassadors Italy has sent to Bulgaria during the past 15 years. I think this is something that people who have inside knowledge and know the facts can corroborate. On the other hand, obviously, there is a very fine Italian school, the cultural activities on part of Italy in Bulgaria are remarkable – for which we are very grateful.

I would also like to say that in the Bulgaria-EU relations Italy has always played a very helpful role, and maybe in this case the fact that I was Prime Minister and we were candidates for the EU, the Italian support was noticeable – which we Bulgarians cannot forget or overlook – but Bulgaria's policy was to be a full-fledged and active member of the EU.

We had been isolated from Europe for some many years that our priority of returning to Europe, of being members of this – I would really call it – a unique project – which is practically a reality because it is almost completed – of a big united Europe within the EU – is something which is extremely important to us Bulgarians.

Personally, I am convinced, even enthusiastically pro-European, and my strong belief is that this is Europe's chance – with the EU representing not only a huge market but also 500 million citizens who in most cases have a very long past, and culturally are on a very high level. Consequently they can have a very important voice in the world by being united, by showing solidarity, tolerance, open mindedness and unity.