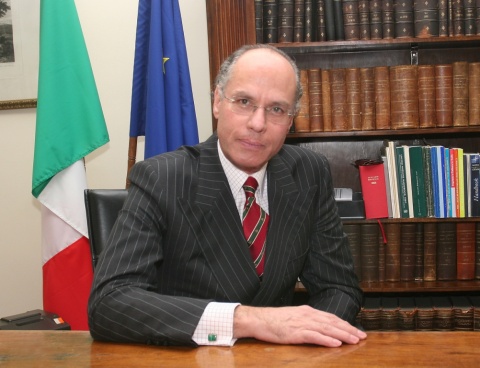 In 2011, Italy is celebrating 150 years since its national unification in 1861 completed in 1871. What do these 150 years of history of the modern Italian state and this anniversary mean for today's Italians?

Italians feel that the 150th anniversary of the Unification of Italy, celebrated this year, is a significant moment in our history.

In that period, we have been through wars, foreign occupation, diversified political regimes; we are among the founding Countries of the European initiatives; we have proved our capacity to resuscitate in 1945; we went through the somber years of terrorism; we experienced the changes after 1968.

This anniversary is a good opportunity to take stock of our achievements, and to envision the commitments in front of us. Like a birthday for a person – when one takes some time to make an assessment – the 150th anniversary enables us to see ahead.

I just want to remind  the warm welcome that our President of the Republic, Mr Napolitano received in any part in Italy he went to celebrate the anniversary. The sincere joy and sense of unity that people showed is the best proof of how much this anniversary is felt first of all by the people itself.

Bulgaria and Italy have a lot of common history. Which episodes do you consider most important? What should the young Italians and Bulgarians living 21st century EU consumer societies take from events such as the Garibaldi movement where their ancestors volunteered to fight for the freedom of another nation?

I would be remiss if I did not consider how our history started having strong ties in 331 AD and even before. I do not want to mention the single many episodes of common history. Let me just remind the Bulgarians fighting with Garibaldi in 1861 - and his statue in Garibaldi Square in Sofia, by my good friend Georgi Chapkanov, is a good memento thereof -, and the Italian fighting with the Bulgarians in 1878.

Also, I wish to mention the fact that two countries belonging to opposite camps until 1989 are now co-operating in Brussels (NATO and EU), at the UN, in theatres around the world bringing peace, health, prosperity.

At the end of the 19th century both Italy and Bulgaria were struggling for their national liberation and unification, while today they are both part of a much bigger unification – or integration effort – the European Union. Do you see continuity in these processes? What do you think is best for Italy and Bulgaria – "more Europe" or "less Europe"?

The continuity is evident. At the end of the 19th century we wanted our freedom. The aspirations of our Countries today are the same: bringing peace, development, culture, well-being, adequate social conditions, to both our peoples.

And we are doing it together, joining arms in our endeavor, jointly with our partners and with future Members of the EU. I have no doubt that a wise increased use of more European solutions can only be beneficial to both our Countries.

Western media stereotypically talk about Bulgaria's problems with corruption and organized crime. What do you see as the major problems in Bulgaria? How can Bulgaria learn from Italy to cope with them?

Bulgaria is working on solving her problems. Many of these problems do not characterize Bulgaria only. They exist in many other countries.

I wish there would be more Public Relations activity to clarify to the media, inside and outside the country, that Bulgaria is worth more than it appears in the media. Beware: PR activity is not all. But it helps put things in their right shape.

The real activity takes place in a concerted way between the President, the Government, the National Assembly, the Judiciary, the Citizens, the business community, the media.

Bulgaria has rightly set its future in the framework of NATO and EU. I would not want to have the sensation that Bulgarians feel that they could receive more from the EU than they offer to it.

A few years ago Italy was Bulgaria's number one trading partner; now, even though the Bulgarian-Italian trade and Italian FDI in Bulgaria have been rising, Germany and Bulgaria's neighbors have surpassed Italy. Why do you think that is?

From your point of view and your experience which is the major factor for attracting Italian FDI in Bulgaria and for boosting Bulgarian exports to Italy?

Factors of attractions: fiscal conditions, capacity of workforce, central position in the Balkans. On the contrary, a certain slowness in the Administration hinders the efforts of foreign investors to bring occupation to Bulgaria. Also, there is still space for improving the performance of the Judiciary.

Concerning Bulgaria exports to Italy, I would presume (but I have no word in this) that more common work among the main actors in Bulgaria might help.

Bulgaria's neighbor Romania is culturally closer to Italy, and appears to be more popular with Italian business. Is that so, and how can Bulgaria compete with Romania and other Balkan states in attracting Italian investments?

Romanian language is certainly more similar to Italian than Bulgarian. Also, there is a question of geographical proximity to North Eastern Italy.

In fact more than 20.000 Italian firms operate in Romania, versus only about 700 in Bulgaria. I strongly believe that there is no specific recipe to improve a country's performance. All the actors must work together, overcoming any inadequate leftovers from the past.

Some regions of southern Italy are about as underdeveloped as Bulgaria. The so called Pan-European Transport Corridor No. 8 (and the respective route extending it to the Caucasus and Asia) has often been cited as the key to the development of the Balkans and Southern Italy. Yet, it remains largely imaginary. What is the potential and the current level of development of this transport corridor? What are the major obstacles that hinder it?

Yes, Corridor 8 remains largely imaginary. The responsibility of the delay is not to be found in Italy nor in Bulgaria.

This being said, a look at the map clarifies my words. I do not have precise coherent figures about the potential of the Corridor to increase the development of Bulgaria.

But I have no doubt that more should be done in the relevant Capitals and in Brussels to accelerate its completion.

Both Bulgaria and Italy are external borders of the EU. France and Italy already staged an initiative to reform the Schengen Agreement with respect to border control. What are the best measures that border countries can take to keep out illegal immigration? How much solidarity should Italy and Bulgaria hope for from the entire EU with respect to this challenge?

I prefer to leave the answer to the first question to the people, in the Capitals and in Brussels, who know more about the situation.

On the question concerning the solidarity to be expected, I would suggest to consider the recent events connected to the arrival of thousands of illegal migrants on the southern coast of Italy.

The demographic crises emerge as a major challenge for most European countries including Italy and Bulgaria with their plummeting birth rates. How can this issue be addressed? Doesn't the traditional solution of letting in culturally and religiously different immigrants harbor potential problems?

The answer to this question implies more time and space that is allowed to me in this interview. And I am afraid I have no new solution to such an issue. And, yes, of course: letting in immigrants harbor many potential problems.

Finally, going back to the EU – do you think that Europe needs the fashioning of a clearly-defined common European identity? Is it true today that what is good for Italy is good for Bulgaria and vice-versa?

I do not believe that we will be able to identify European identity in the next future. We can only strive to approach a definition of some aspects of it.

The question about something being good for a country and its neighbor reminds me of some totalitarian formulas. No: every country must find its own way, in the framework of the common organizations the country chooses to belong to.