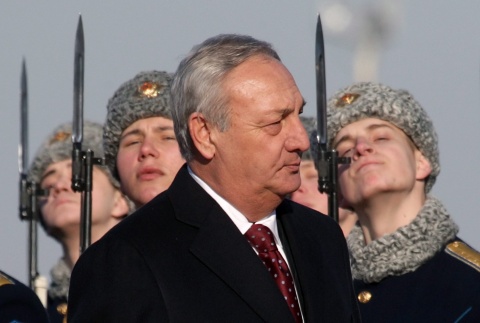 Abkhazian president Sergei Bagapsh passed away in Moscow Sunday following complications of a lung surgery in a clinic in the Russian capital.

Bagapsh was hospitalized to treat emphysema in his right lung and a week ago received a surgical intervention characterized by doctors as successful.

Later the Abkhazian president developed pneumothorax and his lungs failed, leaving him into coma. He died Sunday overnight.

Sergei Bagapsh was born in 1949 in Abkhazia's main city of Sukhumi. Following 1997 he served as PM of Abkhazia, which was then an autonomous republic within Georgia.

1998 marked a revival of the Georgian-Abkhaz tensions, which led to tens of thousands ethnic Georgians fleeing from the region.

In 2005 Bagapsh was elected as Abkhazia's president, to be re-elected in 2009. 2000-4 he had served as a managing director of the state energy company Chernomorenergo.

Abkhazia's independence from Georgia is not widely internationally recognized. It is nevertheless recognized by Russia, which has been instrumental in supporting Abkhazia against the central Georgian authorities.

Three days of mourning have been declared in Abkhazia. The position of president will be occupied by Bagapsh's VP Alexander Ankvab, until the outcome of presidential elections, to be held within 3 months.