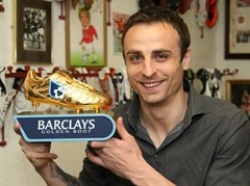 "On a personal level I'm delighted to win this award," Berbatov told ManUtd.com. Photo by ManUtd.com

The players from Manchester's top football teams and rivals topped the Barclays Premier League goal scoring table for the season with 20 goals each.

"On a personal level I'm delighted to win this award," Berbatov told ManUtd.com. "To finish as the joint-top scorer in the best league in the world is a huge honor and something I'll always be very proud of. I love scoring goals and providing entertainment for the fans – I hope I've done that this season.

"Most importantly, though, I feel happy knowing that my goals helped the team win the league. We made history this season by winning the title for the 19th time and it was a great feeling to be involved in that achievement. Individual awards are fine, but they mean nothing if you don't win trophies as well.

"I want to thank the United fans for their support and, of course, my team-mates, who make it very easy for me to enjoy my time here and score goals."

United striker Berbatov joined the race for the Barclays Golden Boot with an opening weekend goal against Newcastle and continued with a superb hat-trick against Liverpool and a phenomenal five goals in a 7-1 home win against Blackburn.

Berbatov and Tevez will now each receive a Barclays Golden Boot trophy and will be given GBP 20,000 each by Barclays to donate to a charity of their choice.