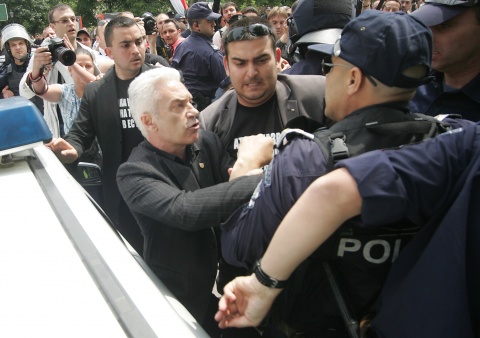 Volen Siderov wrestles with policemen leading Ataka activists during the incident at the Sofia Mosque last week. Photo by BGNES

Volen Siderov, leader of the far-right and nationalist Bulgarian party "Ataka", has issued a warning that paid thugs pretending to be Ataka activists might stage provocations during Friday's Muslim prayer in Sofia

Last Friday, Siderov's party shocked Bulgaria as its rally protesting against the use of loudspeakers by the Banya Bashi mosque in downtown Sofia got out of hand, and far-right activists of Ataka assaulted praying Muslims in front of the mosque.

Siderov has himself declared that Ataka does not intend to stage a new protest rally near the mosque on Friday, a week after the incident.

However, in a statement to the media, the Interior Ministry, the Sofia Police, and the Sofia Prosecutor's Office, sent late Thursday, the nationalist leader claims that paid thugs who have nothing to do with his party might provoke the praying Muslims on Friday.

He claims to have evidence that tensions are prepared in order to discredit his party.

"I understand that the Sofia Mayor has granted a permission to the Muslim community to lay carpets on the street and the sidewalk in front of the mosque. I have information that this will be used by people hired to stage provocations and to stir tensions. Some news websites reported that the Ataka party is preparing to stage a rally near the mosque," Siderov declared in his letter to the Interior Ministry.

He further explains that the leadership of the Ataka party will not be in Sofia until Saturday, and will be traveling around the country.