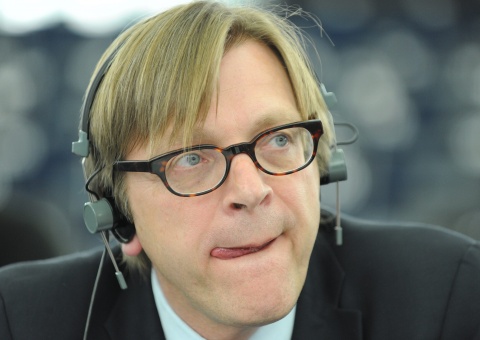 Chairman of the Eurpean parliament`s Liberal`s Guy Verhofstadt during the Depate at the European Parliament in Strasbourg, France, 10 May 2011. EPA/BGNES

Bulgaria must consider outlawing the far-right and nationalist party Ataka over its recent attack on praying Muslims in Sofia, according to Guy Verhofstadt, leader of the liberations in European Parliament.

Verhofstadt, head of the group of the Alliance of Liberals and Democrats, condemned as "racist" the assault on the Muslims in the Banya Bashi mosque in Sofia, which happened last Friday while Ataka led by its leader Volen Siderov was staging a protest rally against the use of loudspeakers by the mosque.

"Bulgarian authorities must seriously consider banning the Ataka party and must prosecute those members found guilty of carrying out racist attacks and those who incite racist behavior. The constitutional right of religious expression of all EU citizens must be respected  and this includes in Bulgaria. Extremist and racist behavior have no part to play in a civilised society. "

The 3 MEPS of the Bulgarian ethnic Turkish party DPS (Movement for Rights and Freedoms) are also members of the ALDE Group.

"These xenophobic acts are a crime against basic human rights and threaten the unique Bulgarian  ethnic model which is the cornerstone of the country's democratic development.   Ethnic tensions are already high in Bulgaria and this will only heighten this tension further.  EU membership is based on a shared respect for fundamental rights, Bulgaria as a member of the EU should uphold and respect these principles," Metin Kazak, Bulgarian MEP from DPS commented.