Bill Clinton in Montenegro: 'I'm Glad to Be in Macedonia!' 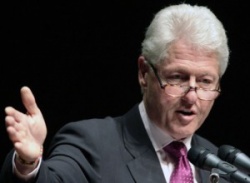 Bill Clinton confused Montenegro with Macedonia, stating he was "thrilled" to be in the latter while actually being in Montenegro.

The former US President was opening a conference dedicated to the region's current problems in the seaside town of Becicii when he made the blunder, the B92 news agency reports.

"If its problems are confronted in the right way, the future of the region will be bright, “including the future of Macedonia whose beauties are breathtaking,” Clinton said, as cited by AKI. “Don’t blow it and God bless you,” he said, triggering waves of laughter among his audience.

The apparent gaffe, however, was ignored and Clinton continued with his speech, stating that all of the Balkans ought to be integrated in Europe via the European Union and NATO.