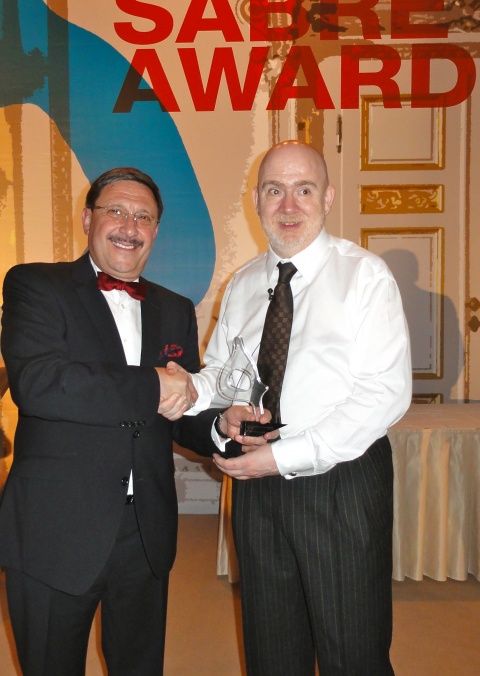 Bulgaria's largest PR company M3 Communications Group, Inc., has been awarded as "Eastern European Consultancy of the Year" for 2011 by The Holmes Report, the world's top independent research organization for communications and PR.

The company was nominated after an independent study of authoritative experts among thousands of companies across the region.

The prestigious award was handed to Maxim Behar, CEO of M3 Communications Group, Inc. by Paul Holmes, founder and CEO of The Holmes Report, at a glittering ceremony in Prague Wednesday evening.

"This is great recognition for all of us, for the Bulgarian PR business, for all of Bulgaria. This is the first time that a Bulgarian company receives a prize of The Holmes Report, one of the largest and most influential independent research organizations in the world, and I am very happy and proud of this. It is thanks to our incredible team, our clients and partners," said Maxim Behar.

The two projects that got the company into the SABRE Awards competition are "Cross Safely" with Postbank and "For Women and Science" of L'Oreal.

The Holmes Report, the world's most prestigious researcher of the global consultancy market, was founded in 2000 by Paul Holmes, a leading US PR analyst. In its description of the "Eastern European Consultancy of the Year" prize for Bulgaria's M3 Communications Group, Inc., The Holmes Report states:

"You don't have to spend very long in the company of M3 Communications Group founder and chief executive Maxim Behar before it dawns on you that he be the best-connected man in Bulgaria. When he claims that he is personally involved with every client of his firm—currently there are about 60 of them—you don't doubt it, because there is no limit to his energy and enthusiasm. His firm, which has been the Bulgarian partner of Hill & Knowlton since 2000, now operates eight distinct companies specializing in public relations, digital and social media, branding, events, graphic design, media monitoring and education (the latter though M3 College, a fully-licensed private college focused on PR and marketing. The PR team numbers about 60, and has experience in media relations, crisis management and public affairs. The recession appears to have had minimal impact on M3's business, with continued growth over the past 12 months. It continues to work for a mix of Bulgarian leaders and multinational clients, including Danone, Michelin, Postbank, Alpha Bank, Lockheed Martin, IBM, Intracom and Tishman International."

The Holmes Report is dedicated to providing insight, knowledge and recognition to public relations professionals. It organizes the world's largest and most sought after public relations awards competition, the SABRE Awards, which recognizes Superior Achievement in Branding and Reputation in North America, EMEA and the Asia-Pacific region. With its prize, Bulgaria's M3 Communications Group, Inc., has become one of the EMEA Consultancies of the Year of The Holmes Report.

M3 Communications Group, Inc., founded in 1994, is Bulgaria's leading company for PR and communication services. In the past 16 years, it has carried out more than 2 500 projects for some 185 clients in various business fields.

Since August 2000, M3 Communications Group, Inc., has been an associate of global PR corporation Hill&Knowlton, which was founded in 1927 and currently has 74 offices in 42 countries.

Bulgarian businessman and PR expert Maxim Behar, the founder and CEO of M3 Communications Group, Inc, is the Chair of the Bulgarian Association of PR Agencies (BAPRA). In November 2010, he was elected treasurer of the board of the International Communications Consultancy Organization (ICCO), the most prestigious global organization of PR associations.